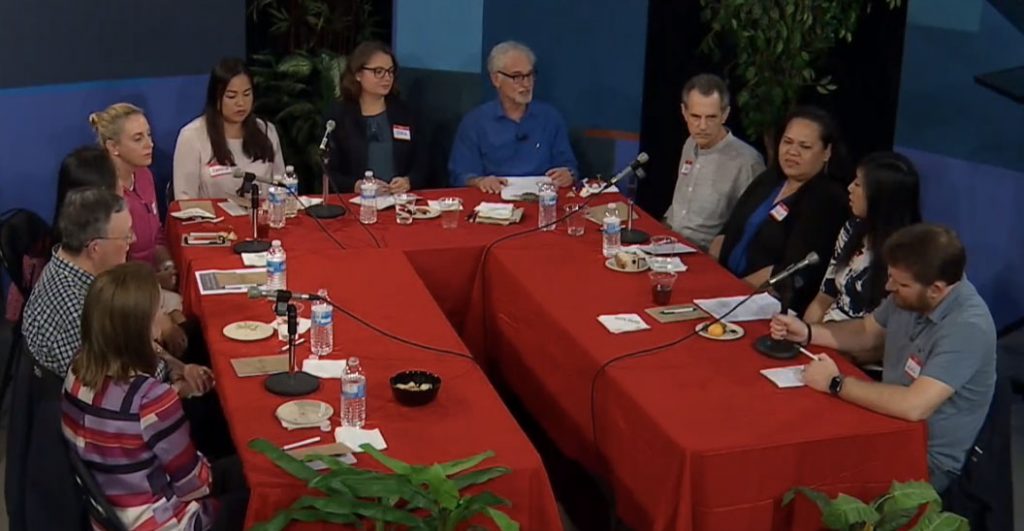 In mid-November a group of 11 had dinner in our TV studio and then engaged in a 90 minute discussion about the need for more affordable housing in the Silicon Valley.

The discussion was one of an estimated 700 that took place that week throughout the Silicon Valley as part of an initiative called “On the Table” < > that was sponsored by theSilicon Valley Community Foundation. The foundation estimates that 7,000 people participated in the affordable housing discussions after sharing a meal.

Our group included three teachers from Palo Alto Unified and one realtor from San Jose who had tried unsuccessfully to develop some of her own property into affordable housing for teachers. They highlighted the extra challenge when it comes to developing housing for middle class earners who serve our communities such as nurses, firefighters, police, and nonprofit employees who cannot afford the marketplace price tags for home ownership or the stratospheric rent levels. Government funding is usually reserved for housing those who make lower wages and who also hope to live and raise families in the communities where they work.

Although the jobs/housing imbalance has been at the roots of the entire Silicon Valley story, the situation continues to get worse. Between 2010 and 2014, 182,800 new jobs were created in San Mateo and Santa Clara counties, while only 16,262 housing units were built. Besides the fact that most of the Silicon Valley cities have little available land, it now averages between $578K – $621K to build a single apartment in this high cost area. City imposed height limits and zoning restrictions squeeze the potential down even further. On the flip side, as Violet Saena of ACTERRA (an environmental organization) pointed out, there are many who are being pushed out by the expensive housing that does get built or the apartment buildings that get converted to fancy condos.

“Out of the box” solutions were discussed but the sentiment that captured the entire group’s attention was voiced by economist Stephen Levy who said we must demonstrate a “shared concern” for housing all the different groups in need be they low-income, middle class, or retirees who are on the outside looking in.

A big thanks to Hobee’s, Trader Joe’s, and Piazza’s who provided delectable edibles for our group of brainstormers.

The discussion at the Media Center was recorded. The full 90 minute video is here: