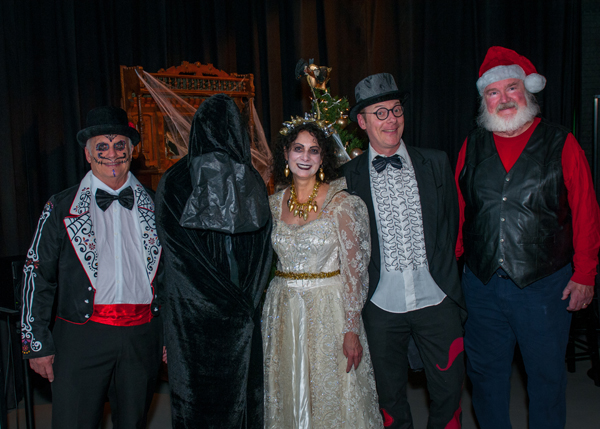 By Eva Barrows
On the dark, eerie evening of December 12, Midpen Media Center volunteers, staff and guests flocked together to celebrate a year of spooky community media. The Nightmare Before Christmas played on the studio’s big screen while white sheet spirits soared high above banquet tables overflowing with Mexican food. Sangria and Mexican hot chocolate were set out on the beverage table accompanied by bony skeletons and decaying foliage arrangements. Guests dressed in holiday sweaters, Santa hats, and glittering gothic garb, mingled over finger food whilst creating plans for future shows. Between breaks in poetic storytelling following Jack Skellington, who wore all black and skull face paint, as he searched the Bay Area for a place to fit in, recaps of the year at Midpen played on the studio screen. Zoom In field production and 2018 studio highlights reels reminded the audience of all the volunteer hours they put in throughout the year.

Just as Jack Skellington found where he belonged, at Midpen Media Center creating his own TV show, the hardworking crew of Midpen volunteers was honored for their time spent producing shows. An impressive 172 people volunteered in 2018, and the top 20 were recognized during the festivities. Toni Gooch, Asia Dubarenka and Fred Bockmann were this year’s top three volunteers, with Toni Gooch crewing a total of 89 shows!

View photos of the macabre décor, tantalizing food and glorious costumes taken by Doug Kreitz in our online gallery. Thank you again to all of our volunteers, you make community media happen!