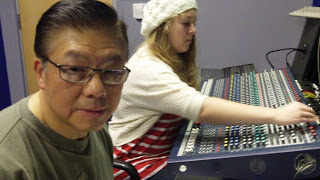 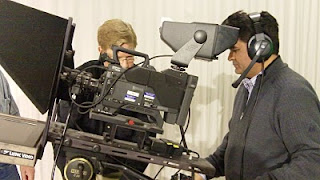 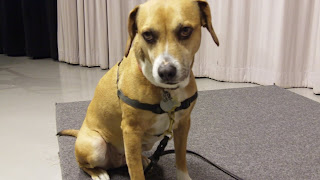 Last night Media Center volunteers produced the second PRACTICE SHOW where volunteers have a chance to practice the jobs they want to try in a safe setting that not only forgives mistakes but encourages them as the valuable learning tool that mistakes are. Remember the entrepreneurial adage? Fail often fail fast. Well that’s what you can do on the Practice Show. And you can have a good time, too. Last night’s guest set the stage for a good time. Chiquita, my dog, was camera shy at first and insisted on facing the back wall most of the time. However, a succession of practice show hosts soon put her at her ease and she relaxed and gave the cameracrew something to work with.

Last night’s focus was honing directorial skills. We ran a series of eight 2 minutes show where the goal was for the practice director to get all the tapes rolling, the graphics up and down, the cameras ready, the mikes up and the talent cued all in the right order — Stan, Bill, Leena and Hannah took turns making it happen. I wanted to stay out on the floor and work on my camera skills. I was much better this time as I learned how to work the contrast, brightness, and peaking settings on my monitor to get me the best picture to work with to practice the art of focusing. I spent a lot of time out of focus and trying to get back in focus as fast as I could. Also working on camera out on the floor were Fred, Hannah and Anis. There was also ample time for people to try their hand at audio, so Fred, Anis, Bill and Hannah got in some time on the audio board, setting the levels and bringing the mics up and down.

You can watch the eight minisodes of the Chiquita Practice Show starting Thursday, January 28 at 7 pm on Channel 30.

If you want to crew for the practice show, keep an eye on the Yahoo Groups for an announcement of upcoming shows or send Scott an email at Scott.vanduyne@gmail.com.

An interesting outcome of this show was that Anis in a moment of weakness volunteered to draw up an electrical grid of how the control room is wired. When audio maven Eric crawls behind the console, what is he doing? Anis is planning to help us find out.