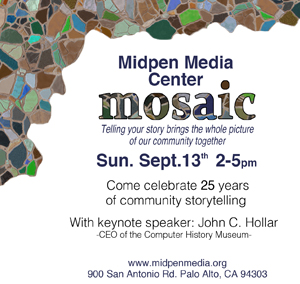 We’ve come a long way from where we started! As a founding board member of Mid-Peninsula Access Corp. (MPAC), I hired Elliot Margolies as our first executive director and we opened the doors on Park Blvd. on February 5, 1990. We started out with one telephone sitting on the floor that first day. We had no office furniture, no equipment, no studio. Those first few weeks, Elliot and I circled “for sale” ads in the local papers and drove around picking up free office furniture, like a credenza from a houseboat in Redwood City. We bought a used copy machine at a garage sale. Then we bought a couple of field cameras and we were on our way.

We shared Channel 6 with Cable Co-op. Volunteer programming manager Maureen O’Sullivan drove around town with an orange crate in the back seat of her VW bug, collecting VHS tapes from community producers. She’d play the tapes manually on the decks in master control – we started with 10 hours of programming per week.

When the first Gulf War erupted at the beginning of 1991, we initiated a series of live shows providing an important forum for citizens to express their feelings and reflect on rapidly unfolding events. Having no studio cameras or official “call-in” equipment, we improvised by using a camcorder and taping a microphone to our office speakerphone.  We took comments and questions from viewers.  It worked!  One of our viewers, former Secretary of State George Schultz, called after watching a forum that provided insight into the various Middle East perspectives.  Mr. Schultz said he wanted to invite one of the participants who appeared on the forum to consider a job opening at the Hoover Institute! For 25 years our community members have found a voice and a platform here.

Being a founder of this organization is the single most gratifying professional event of my 40-year career in video production and community media. And I am eager to see how our future will unfold.  We got a glimpse of that bright future when media visionary John C. Hollar, CEO of the Computer History Museum, spoke at our 25th anniversary celebration – the Mosaic Open House that was held September 13. John was joined on stage during our live 3-hour show by our fans and well-wishers, many of whom have helped shape our institutional history and contributed to our treasure trove of community stories.

We are so proud to have been chronicling those stories for the past 25 years. As part of the Mosaic event we have showcased some highlights in clips, performance, and, most importantly, community testament. I was honored to host this commemorative program.  Roughly 70 guests participated, including two-dozen producers from the early 90s through the present, a dozen government and school officials, 18 artists and performers, and 17 Board and staff members. The program will replay in its entirety in the months to come and be available to enjoy on our Youtube channel.

If you haven’t crossed our threshold lately, come by and bring a friend. You’ll see what a difference the volunteers, staff and community partners have been making since those early days. We did some digging and have a few data points. How many storytellers have we trained? Over 7,000!  How many hours of government and school board meetings have we covered in 25 years? Over 30,000! How many hours of community programming have we broadcast? Too many to count! But we started with 1 channel, 10 hours a week, then we had 2 channels, then we went up to five and now with the addition of a regional channel, we program 6 TV channels, four that operate 24/7. Bay Voice Channel 27 that rolled out this year now reaches over 400,000 homes in 15 cities between Atherton and San Jose.

Our Mosaic event was more than a summing up.  When the last guests left and we were resetting the studio and our facilities to get back to business as usual the next day, we felt the great gift and the great responsibility. To be able to be a part of something that has its very roots deep in our first amendment right to free speech, where cost and ability and connection are barriers everywhere else but here. How are we going to keep our lights burning even brighter over the next 25 years? I’m sure you have ideas. We invite you to imagine with us our next 25 years. It’s never too late to start your Midpen Media Center adventure. We are waiting for you.