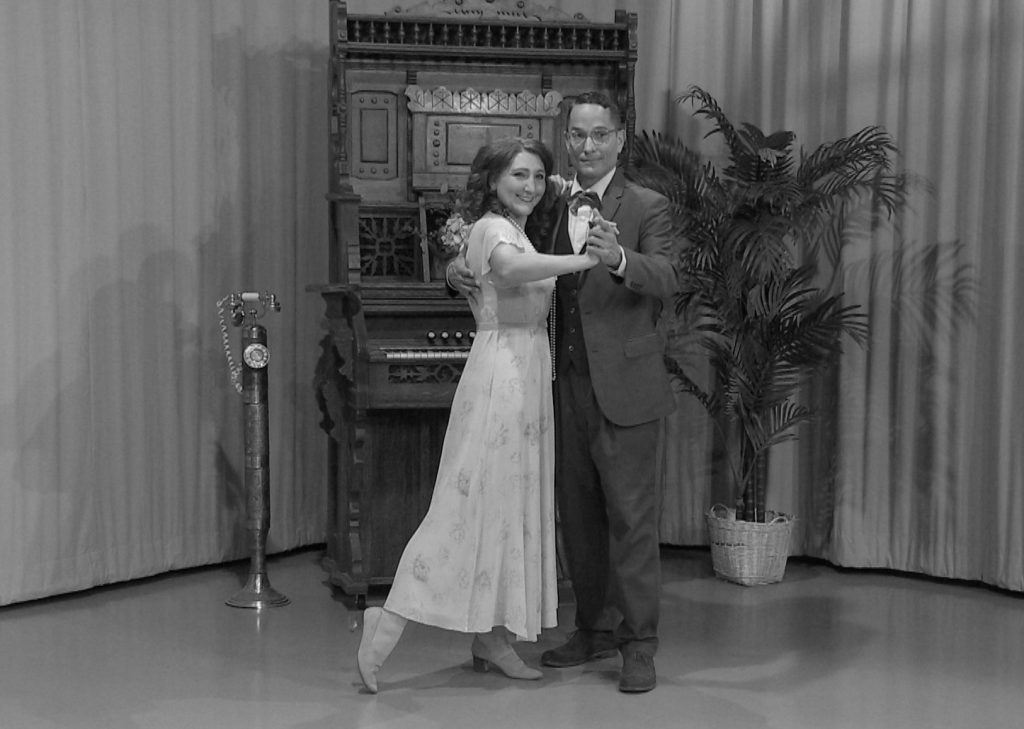 Waltzing to airy jazz, gliding past couples on a crowded dance floor, cheerfully charged excitement fills the scene. Creator and producer Lessa Bouchard of Arc:Hive Mixed Media was at Midpen Media Center this summer filming her latest collaborative creation. “A Moment Unbound: Adventures through Time,” web series casts a nostalgic look back at 1930’s era Palo Alto with hints of Science Fiction Fantasy tossed in.
Back in 2010, Bouchard began exploring her relationship with books creating a sculptural installation called Off-line. “It’s about the inherent instability of text and the changing relationship with information,” she says. The bookshelves made of wire run through boards, sway to indicate this changing information dynamic. Inspired by her installation, Bouchard began work on writing a play in collaboration with other writers. The play’s setting, The World Archive and Ephemerarium, and its fanciful book sprites evolved from the installation, and a series of interviews Bouchard conducted with longtime Palo Alto residents. The play titled “A Moment Unbound” was well received and performed at Dragon Theatre in 2014.

The new web series, a time-traveling prequel to the play, is set in 1933 Palo Alto and sticks to the same whimsical world. Stealthy rumrunners, unexpected dirigibles and high stepping ballroom dancing all memories made in Palo Alto are brought back to life through the series. The stories are highly influenced by interviews Bouchard did with the owners of Bells Books in Palo Alto and local technology luminaries. Bouchard’s favorite part of creating the web series she says is, “Learning little pieces about the community, hearing little stories, interviewing and getting to know the people who have spent their lives here, and getting to know the computer scientists.”

The web series offers a new way to connect with local history. A 15-year-old young man volunteering his time to film the project told Bouchard the web series felt like a “local history Doctor Who” and he connected with the message of the series immediately. The “webisodes” will be released on Arc:Hive Mixed Media’s website in two to five-minute clips and will air on Midpen Media Center cable channels in late fall.