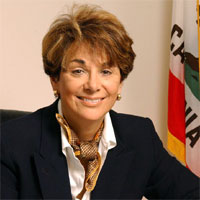 The Media Center joins the rest of the membership of the Alliance for Community Media (representing over 3000 cable access stations in the U.S.) in celebrating the appointment of Representative Anna Eshoo as Ranking Member of the Communications and Technology Subcomittee. FCC Commissioner Michael J. Copps had this to say about our Anna (yep, she’s our Congresswoman!):

“Having had the opportunity to work with her for numerous years covering the whole gamut of media and telecommunications issues, I know of her singular and heartfelt commitment to the public interest. Citizens and consumers come first for her. She has a very special vision of what an open and dynamic communications sector means to the United States and how important it is to our civic dialogue.”

The subcommittee holds legislative jurisdiction over all matters involving telecommunications, including oversight of the FCC, cable, broadcast, voice telephony and the Internet. Our Executive Director Annie Folger has visited with Anna Eshoo here at the Media Center. At the behest of Anna Eshoo, Annie has testified before Congress regarding the threat to locally-produced, grassroots television at the hands of the media giants. At that same hearing, Anna Eshoo read our Mission Statement into the public record, a point of real pride. Need a reminder of our values? It’s more than a job, more than just a volunteer gig, folks, it’s a passion for civic engagement which keeps people like Annie and Anna advocating for us.

If you haven’t seen Annie and Anna short videos from the PEG access hearing a few years back, I’ll post some short excerpts here. We are very excited that Anna received this important appointment, and know that she will speak for us before powerful interests that think they want to be our adversaries. Do you think that once they get to know us, they’ll come over to our way of thinking? It’s certainly possible with Anna Eshoo driving the dialog as the new Ranking Member of the Communications and Technology Subcommittee.