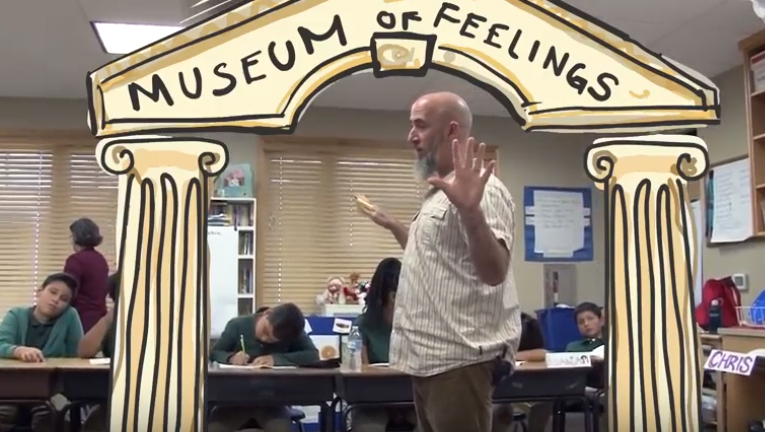 Cheerful music accompanies live-action footage of a 5th-grade class at Beechwood K-8 School in Menlo Park, CA, as they file into their classroom. Acknowledge Alliance classroom facilitator, Chris Chiochios, leads the students in feelings identification exercises. As he lists “feeling” words on the dry erase board, animations of those feelings pop up on screen and react according to the emotions they represent. Happy bounces by, angry shakes and embarrassed hides real quick. This animation-enhanced, live action video clip is part of Acknowledge Alliance’s half-hour pilot “Resilience from the Heart,” a Midpen Media Center “On-Ramp” show.

Dan Turturici, the show’s video editor and animator says, “I thought this would be a good opportunity to experiment with animation techniques that I had messed around with in my spare time.” Turturici and Adams identified the key points of the classroom feeling exercises to emphasis through animation. The pair worked with Jill Andre, a fine artist and professional graphic designer, to create hand-drawn cartoons that matched the classroom’s color palette and children’s age group.

Turturici used Adobe After Effects to create the animations. Key framing, or tweening, is one technique he used. “The software will automatically fill in the movement between two points on the editing timeline. To make the movement seem more lifelike, I’ll add a motion blur effect because that’s how our brain processes motion,” Turturici says.

The goal of the animation element within the show is to connect viewers with the classroom lesson. Turturici says, “Memorable visual cues can help emphasize what we want the audience to do and hopefully keep them more engaged.”

Midpen Media Center’s On-Ramp program was created in 2007 and has fostered many successful and award-winning shows. For example, “Abilities United Community Connections” an ongoing series supporting the differently abled, is the winner of multiple Western Access Video Excellence (WAVE) Awards and national Hometown Awards.
For more information on how non-profits, educational or government groups can become an On-Ramp-sponsored program, reach out to Midpen Media Center Production Manager Karen Adams (kadams@midpenmedia.org).