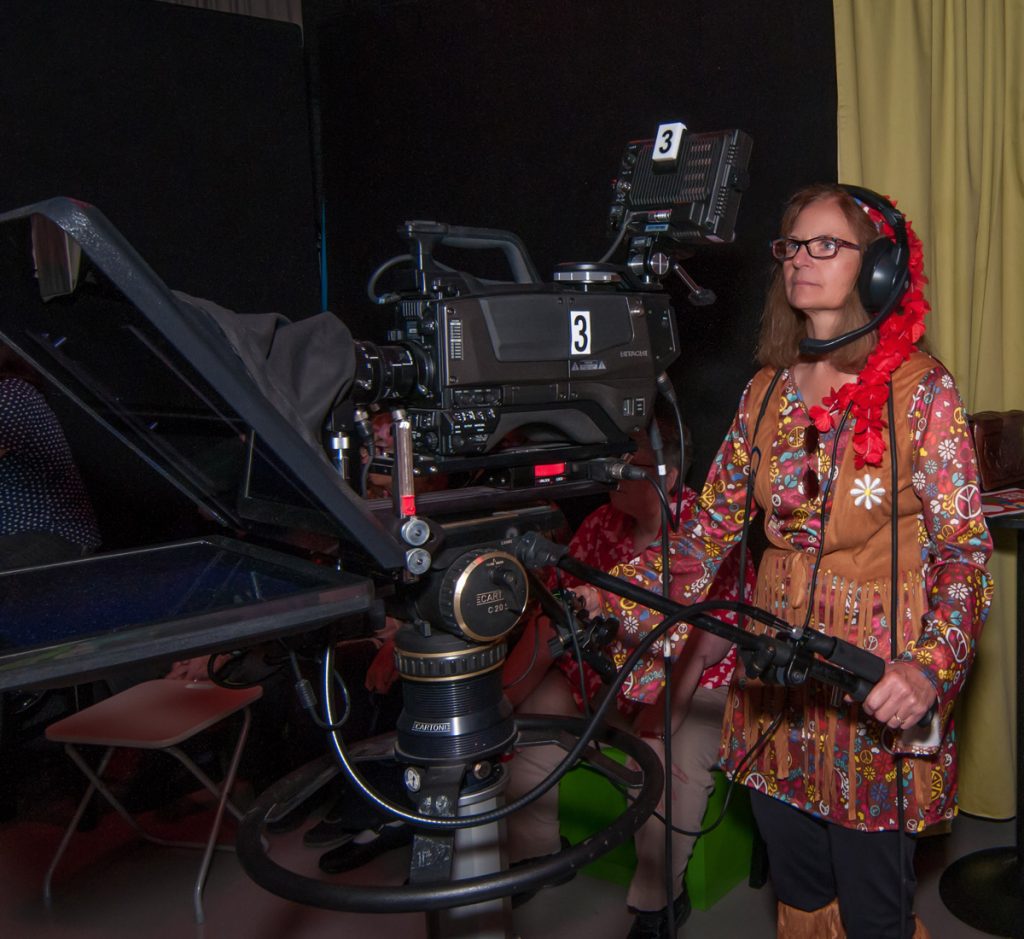 By Eva Barrows
The Autumn of Love, a 1967 Summer of Love psychedelic inspired party was held at the Midpen Media Center on Saturday, October 28th. The well attended open house delighted the senses of the Media Center community. Delicious food, vivacious music and thought-provoking panel discussions helped celebrate the role Palo Alto and the Peninsula played during that pivotal year.

A cheerful mood was set the moment guests walked in to find ecstatic emoticon name tags at the check-in table. A tasty assortment of party food from True Foods Kitchen: hummus, guacamole, mushroom chow mien and a table full of pies by Good Earth, enticed people to linger over neon party plates. As guests milled around the studio lobby, they stopped to watch a large monitor playing the feed from the in-studio panel. The discussion was on the topic, Turn On, Tune In, Drop Out (psychedelics and human potential). Debbie Gisonni, past Midpen Interim Executive Director, decked out in Cher wig and fringe vest moderated the intriguing topic. Dr. James Fadiman psychedelics scholar, Dr. Ginny Anderson psychotherapist, and Martin Wasserman Midpen Producer and ’67 participant, spoke about their experiences with psychedelics. The effects of drugs and state of mind were topics of interest for this group of speakers. Studio camera operators had their hands full trucking the floor cameras to get all the best shots of the action. The jib camera soared over the room cruising for candid crowd dance shots. Judy teased party goers to get out on the dance floor and shake their groove thang. In droves, people left their harem inspired lounge seats to join the celebration. Expert director Jesse Norfleet called rapid fire shot directions in the control room, catching the best band and dance moves. Guests were welcome to pop into the control room and watch the master switcher and audio tech at work. Multiple colorful studio shots filled the control monitor making it hard to guess which one would be the next live shot. The second panel of the day focused on the Anti-War Movement stemming from students at Stanford in the late ‘60s. Moderator Paul George, Executive Director of Peninsula Peace and Justice Center led Vice Mayor of Mountain View, Lenny Siegel and Dorothy Bender, law commune public defender during the anti-war movement. It wasn’t the Summer of Love for these panelists it was “Vietnam Summer” or “Summer of Activism.” Burning draft cards, demonstrations to block draft centers and countless sit-ins were just some of the actions students took against the war. Siegel points out that they succeeded in convincing the U.S. government that the country’s children were not going along with the war.

Midpen Media Center community came together during the Autumn of Love event to recognize the awesome team of volunteers who serve as the backbone for the shows produced at the Center. During a free spirited ceremony attendees blew bubbles in-studio as the volunteers who crewed the most shows throughout the year were highlighted. Toni Gooch took home the win for best 60s fashion!

Special thanks go to Karen Adams, Midpen Production Manager for organizing this groovy day of celebration and her 18 assistants for setting up and taking down the event. Rock on and peace out!