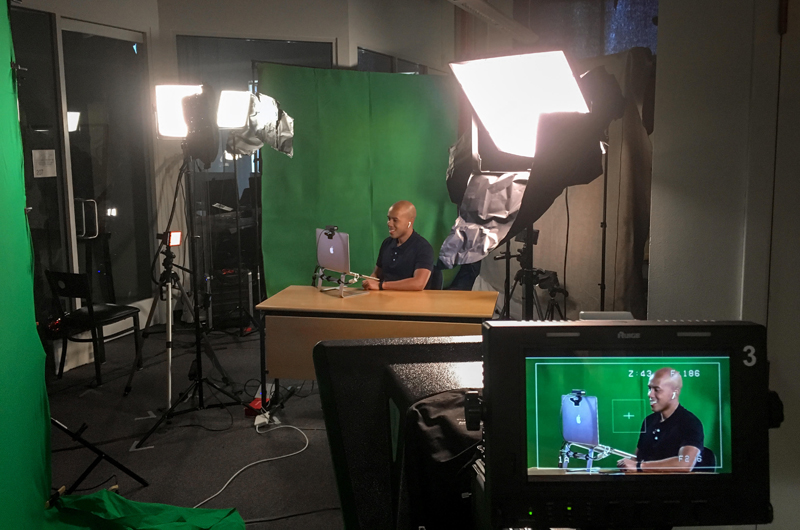 Say the boss is out of town on business, but it’d be great to have them around the office for an important meeting. With the new Beam by Suitable Technologies, the boss can virtually be in two places at once. Instead of talking on a faceless conference call, the boss can pilot a Beam unit—live video of them on a height-level, mobile monitor connected via a remote-controlled base—to participate in meetings and roam about the facilities as if they were physically at the location.

The makers of Beam came to Midpen Media Center Professional Services looking for a way to capture a real-time test drive from both ends of the Beam connection, remotely controlling the Beam and interacting with it on location.
The Beam video demo was a mind-bending technical challenge for Midpen Media Center co-producer and director Karen Adams. “We were faced with simultaneously capturing a “salesperson” interacting with a “pilot” on a roving Beam machine, and a pilot navigating the Beam on a computer interface displaying the salesperson, the pilot’s Beam image, and a control panel,” she says. Contending with picture in picture in picture, eight video streams and simultaneous audio, Adams enlisted the help of Midpen Media Center tech experts to plan the best way to handle all of the feeds.

The production team concluded that the shoot would need to take place on two separate sets at the same time, so that the audio of the test-drive pilot could be captured apart from the salesperson interacting with the Beam. The isolation of the actors added authenticity, mimicking the real-life feel of logging into and navigating a Beam remotely. “The clients were thrilled that we were the first to capture their vision of showing off real-time, on-screen interaction from both ends of the BEAM connection,” says Adams.

Doug Kreitz was in charge of creating a second “studio” in Midpen Media Center’s lobby. The second set consisted of two green screens and a gray backdrop surrounding the desk where the pilot sat operating the computer that controlled the Beam unit in the main studio. Two cameras from the studio had to be rolled into the lobby, and all of the windows in the lobby, including the skylight, had to be covered up to control the second set’s lighting.
Over a week’s worth of visual-effects-heavy editing by Dan Turturici and Kyle Wheeler went into the post-production phase of the demo creation. The editing duo used masking and compositing techniques and layers of filters to modify the computer screens and place the pilot in an office setting.

The Beam test drive demo is a huge technological accomplishment for Midpen Media Center’s Professional Services. Tyler Hoffman of Suitable Technologies’ PR team says, “We made the right choice in working with Midpen Media Center. Our final Test Drive video gives a very accurate portrayal on how a Beam works, including what it’s like to be the Beam pilot. The team took the time to understand the technology and collaborated with us on how to best portray that “aha!” moment when using our Beam. The crew was not only fun to work with but had a fine attention to detail that created a consistent, high-quality video using a variety of creative camera angles.”