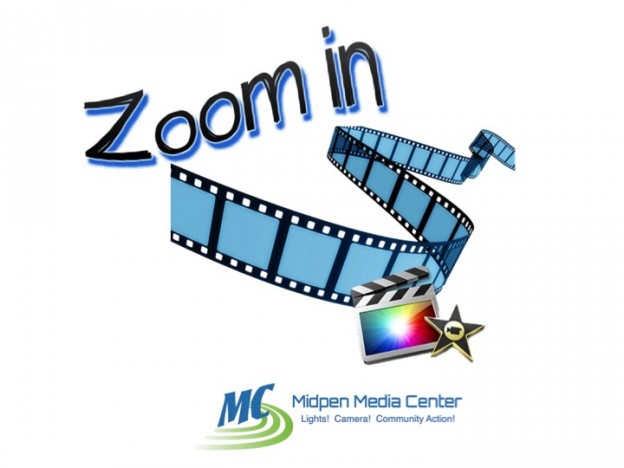 California’s drought is an issue that currently affects many of our lives. Our state and cities have instituted water usage restrictions, and the dryness is apparent by the yellow lawns popping up everywhere around us, some even with signs saying “Brown is the New Green.” Leah Rogers, who took both our Zoom In and studio class, put her amazing talents to use and created a beautiful documentary called “Tuolumne to All of You.” This documentary, which recently debuted at the Tuolumne River Film and Culture Fest, tells the story of our main water source, the Tuolumne River. Touching on its past, present, and possible future, it illustrates the important roll this river played in the development of this area, and how it continues to be a lifeline for our community. The Midpen Media Center is kicking off new blog series called “Behind the Scenes” where we highlight the great achievements of our volunteers and get a closer look into what goes into the making of a great documentary or studio series. Considering the timeliness of this issue, I can not imagine a more suitable person than Leah to ask a few questions about her film and background. I hope you enjoy her documentary and learning about Leah as much as I have.

1.  Leah, how and why did you become involved in the Midpen Media Center?

I took the Zoom In and TV studio classes in the Spring of 2014 to explore the world of video and community TV.

2.  Your film is such a great film and such an important topic. What motivated you the create “Tuolumne To All of You”?

I have always been interested in water. As a geologist I chose to specialize in groundwater. Even though it doesn’t flow by us in the San Francisco Bay Area, the Tuolumne is OUR river, the one from which we get most of our water.

3.  If there was one lesson your viewers take from watching this film what would it be?

I just want to remind people that when we are tightening our belts in regards water usage, that we are in fact saving water that comes from Yosemite National Park and that feeds a great and beautiful ecosystem. That might make it easier to honor and savor it.

4.  Tell me about your background and how it contributed to the making of this film. Why did you become interested in hydrology? When did you develop an appreciation for nature?

I have loved nature for as long as I can remember. The musician, Bill Walker, whose music I used for the soundtrack, is a childhood friend. We have a memory of saving tadpoles out in the field behind my house, moving them from a drying puddle to a bigger creek.  We were about 5 years old at the time, so maybe that is one of my earlier environmental efforts. I loved the college field trips in geology and many people were going to work for oil companies, but I decided water was more important to people than oil. I worked as a research hydrogeologist for years. Also I went with friends on river trips in rafts and kayaks.

5.  What was the biggest obstacle you faced in making this film?

I would say film editing is the biggest struggle for me and thank goodness my friend Nate Gardner who stepped forward to help save the day. Sound is also a real challenge, especially when I wanted to do interviews outside. I learned a great deal by doing things poorly the first and second and third time.

6.  What was the greatest moment you had in making this film?

Actually having almost 300 people in a theater watching the movie( at the Tuolumne River Film and Culture Fest) was perhaps the most intense moment, which was both frightening and thrilling.  No one threw vegetables and many kind people said the film touched them deeply.

7.  What is your relationship to the Tuolumne River Trust?

The Tuolumne River Trust is just a great organization whose leadership has such love of the river and such energy for local and state action. It has been one of the non-profits that I support with my resources however I can.

Absolutely, conservation is the one thing each of us we can really do in terms of our water resources use. No one really wants to talk about population control or moving out of state, so we had better get better at conserving.

9.  How have people responded to your film so far?  Do you have any big hopes or plans for your film like entering it into contests or impacting a specific audience?

The response has been very supportive and enthusiastic! I am deeply grateful people have found it opened their eyes in some way about how and from where they get their water and also how lucky we are to have this sierra water in our dry climate. I feel too busy to really enter contests. I started filming again for next year as we hope to have another Tuolumne River Film and Culture Fest in 2016. I wanted some footage of the Paddle to the Sea paddle-a-thon, which started just after the film festival. (www.paddletothesea.org)

10.  Do you hope to produce more films? If so, on what types of topics?

Besides the Tuolumne River, I am working on two projects right now. The first one is about tango musicians Carlos Gardel and Alfredo Lepera and the other is about the botanist, Sir Joseph Banks who went with Captain Cook on his first voyage to the Pacific 1768-1771.

One thought on “Behind the Scenes: Tuolumne To All of You”