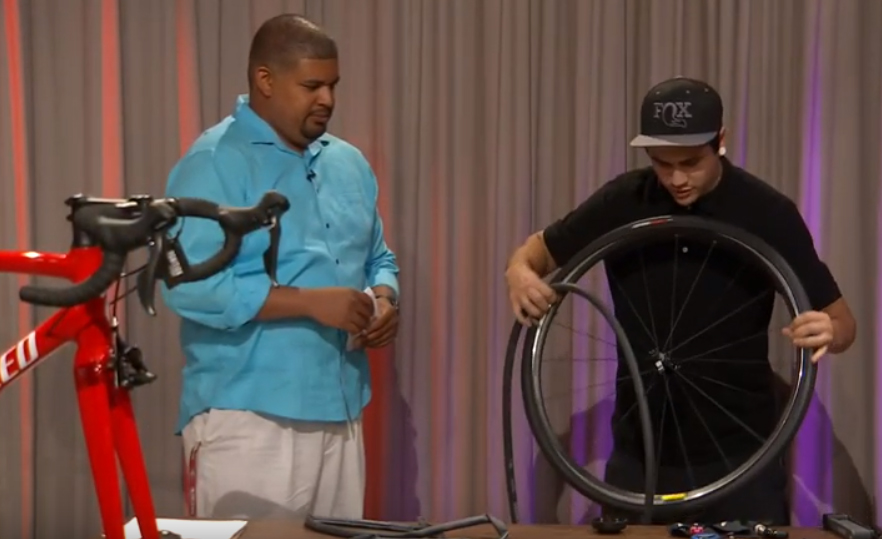 Ever wondered what it’s like to be a studio camera operator or the person calling the shots from the control booth? Midpen Media offers a Studio Production Basics Class where you can learn each studio crew position and be part of a team creating a cable-ready TV show. Use your new skills to help out on established shows or create your own TV show.

As soon as the August studio class began, the students got to work brainstorming potential show ideas. Co-producer Eva Glasrud says, “A lot of topics came up, from local theater to basketball, to using AI to sourcing coffee beans!” After an anonymous vote, the group decided on biking as their topic because of its wide appeal and accessibility to experts in the field.

Glasrud had to call around to a few bike shops before she found someone who was willing to be a guest on the show. “It was slightly harder to convince people to be on TV than I realized,” she says. Also in charge of finding a show host, Glasrud initially focused on finding a biker, but widened her search and landed on Arturo Spell who’s working on earning a degree in sports broadcasting.

The class’ final product, “Bike the Bay,” takes a comprehensive look at biking in Santa Clara County. Greg Unangst of the Bike Pedestrian Advisory Council (BPAC) of Mountain View spoke about the benefits of biking. As commuters transition from driving cars to biking to work or for pleasure, there will be fewer carbon emissions released into the atmosphere. Secondly, biking improves riders’ health by getting people moving around outdoors. In the last half of the show, Spell speaks with Danny Brown of Cognition Cyclery. Brown shows us how to change a tire inner tube and what tools are needed to get your bike back on the road. They also discuss different bike options and how to pick the right bike for your needs.

Check out our workshop offerings and sign up for the next Studio Production Basics Class. Let us help you gain the skills to make quality TV programming like “Bike the Bay.”