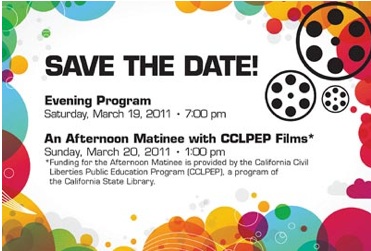 Charlie Class, who produces a bimonthly studio show called “Michael Killen on Creativity” and bicycles in another show, “Square Dance Live”  has got a secret passion.  He has become passionately involved in the production and the promotion of a new documentary about the Japanese Internment experience.

GILA RIVER and MAMA is a documentary produced and directed by Claire Mix, whose mother Ruth was 15 years old when she volunteered as a nurse’s aid at a Japanese Internment Camp.  Ruth’s mother, Claire’s grandmother Frida was a teacher at the school in the compound, and she devoted herself to finding ways to make life more bearable for the Internees.  Charlie knows Claire and knew her mother. Using actors,  this documentary  recreates actual events  catalogued by Ruth, who shared her experiences with her daughter when Ruth became terminally ill in 2007.  Claire was riveted by her mother’s tale and the re-telling of it became her obsession.  At the age of 15, Ruth Mix began a career of smuggling in contraband goods like cameras and film into the camp so that the living conditions could be made record of.  She also smuggled in items like soap and cloth and other basic items denied the Japanese while imprisoned.  She formed lifelong friendships with some of the Internees and her life became inextricably entwined with those friends.  When Ruth died, Claire picked up the thread of her mother’s story and her friendships.  This documentary is the result of three generations of activism on behalf of the injustices of the Japanese Internment Camps.  When Charlie learned of the story, well, he couldn’t stay away either.  Charlie has been instrumental in supporting this project and bringing it to fruition.

A special screening takes place today at the COLLEGE OF A SAN MATEO ASIAN PACIFIC AMERICAN FILM FESTIVAL in Building 03 at 1 pm.