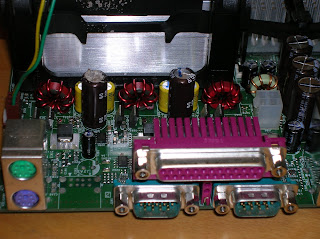 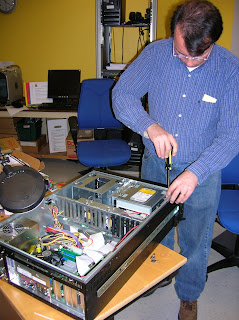 The crippling of the high tension tower on Wednesday morning brought down our channels. And I mean really brought them down. When the power was restored a little before six pm two days ago, IT Specialist Chris Pearce returned to the Media Center to get the Tiltrac up and running. Tiltrac is the brain that operates the cablecast system. Anyway, it looks like Wednesday’s power surge blasted through our UPS system designed to protect our systems from just such a catastrophe! Chris took the whole system apart and found the source of our woes. The picture of the motherboard features two capacitors. The one on the right looks shiny and the one on the left looks burnt out. See that? Aha! The culprit! Anyway, 48 hours and two motherboards later, on very little sleep, Chris flipped the switch, and the Channels came back on line just before 8 pm last night. The head-scratcher was when the motherboard was replaced twice, why couldn’t Tilt-rac find its operating system? Chris eventually frankensteined the operating system onto a new drive and told Tiltrac to look there instead of the old drive. Kind of like putting the old brain into a new body. And like Frankenstein, not pretty, but functional. Chris has got his work cut out for him restoring Tiltrac to its former pristine state. But for now, all is well in Master Control. The sky is blue, the birds are singing and Chris can get some sleep.