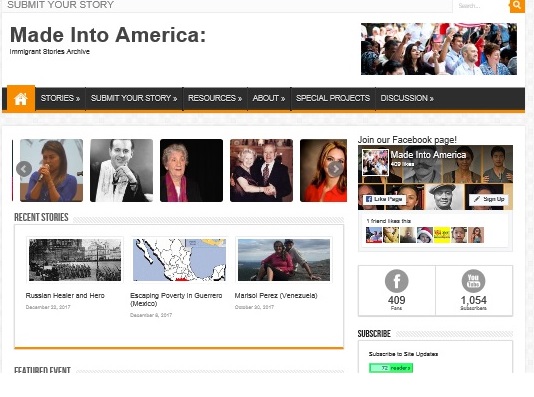 by Elliot Margolies
Last month we received an unexpected submission to add to our archive of immigration stories at Made Into America.
The name of the immigrant had been changed since she is undocumented as are two of her four children – since they were born in Mexico. At the end of the piece it said that the story was from “Civic Club.”

I wrote back to the Civic Club email address and asked for a bit more context, assuring them that we would maintain the anonymity of the immigrant family in their story. The next day I received an appreciative email that described the Civic Club as a group of mothers and their daughters in a South Carolina city.

The mothers formed the club wanting to impart a sense of civic responsibility to their daughters. They started talking about immigrants and realized that since the early colonists had left Europe for the New World people often immigrated for the same reasons – seeking liberty, opportunity, and freedom from persecution or danger.

Doing an Internet search they stumbled upon our web site archive. Then they interviewed a friend of one of the moms and submitted the story that they wrote about her. In a few months time, there will likely be 300 – 500 people who read their story on Made Into America.

It’s rare to get a submission from another part of the country. Most of the stories in our archive come from workshops we conduct in local churches, schools, genealogy classes, and events we’ve helped to set up. Few of the 5,000 who visit the web site monthly use our submission form to share their own family story. Thanks to a grant from Facebook (via Philanthropic Ventures) and another from The Acton Family Foundation, we’ve been able to go into high school classes and collaborate with history and literature teachers to conduct a unit on immigration stories that result in a continuously growing collection.

Like the groups of stories we unexpectedly received from a classroom in San Antonio, Texas, another in Illinois, a company in Philadelphia…. and like the collection of poems we received from students in a small town in North Carolina, these submissions feel like wonderful, serendipitous gifts. They bring a profound sense of reward for the work we are doing to highlight the integral American story of immigrants and the challenges so many face when they start a new life from scratch. We live in a wonderful diverse tableau of a nation built by wave after wave of determined, hopeful immigrants. We send a big thank you to the Mothers and Daughters Civic Club in South Carolina.