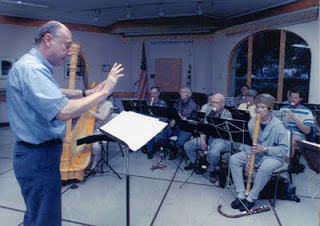 The Mid-Peninsula Recorder Orchestra, directed by Fredrick Palmer presented its annual “Holiday Concert” at Grace Lutheran Church, Palo Alto on December 5th 2009. The concert was recorded and edited for cable-cast by Andrew Mellows. The concert includes music from the 1300s through the 1900s.

The concert debuts on Channel 27 this Sunday, December 13, 2009 at 8:30 am. You can watch it many times during the holiday season including Thursday, December 17 on Channel 30 at 7:30 pm. Follow this link to find out when you can watch this delightful one-hour program.

Andrew Mellows provides the Media Center with various programming throughout the year. He is the producer of the weekly cablecast of the Sunday service at Grace Lutheran Church.

What I want for Christmas this year is a handful of Andrew Mellows… locally focussed producers that bring us the local programming that just can’t be seen anywhere else!

The Media Center is grateful for all our community producers!