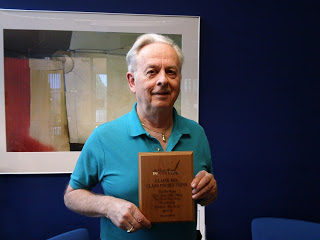 Gila River And Mama: The Ruth Mix Story was awarded 1st Place in the documentary category of the San Francisco Peninsula Press Club 35th Annual Greater Bay Area Journalism Awards.  MC long time producer Charlie Class served as Executive Producer on the Project.  The documentary describes the double life of nurse Ruth Mix and her daughter Claire who served as a nurse’s aid at the Gila River Internment Camp during World War II.  Ruth, who felt deeply the injustice of the imprisonment of US citizens of Japanese descent, worked tirelessly and at times unlawfully to improve the lives and living conditions of the families consigned to the barren wasteland camp.    Her daughter Claire who is featured in the documentary shares her mother’s story as well as her own story, describing the friendships she formed with the young people in the camp.
This distinction places the documentary among six films that will be under consideration for an Emmy.  Charlie believes it is the power of the story and the subject of the story that set it apart.  Unlawful detention of citizens within the US during WWII has long been taboo and a source of “shame” among many of the families that were affected.  Many children don’t even know that their parents were subject to such abuse.   Charlie hopes that the telling of stories like this one will encourage those who are hurting to share their stories and become part of a larger dialogue that will lead to truthfulness and healing with regard to one of the darkest pages in the nation’s history .
Be on the lookout for more playbacks of the video on our channels as we put Gila River And Mama: The Ruth Mix Story back in rotation!  Thank you Charlie for giving it to us!  And our profound congratulations from the Media Center on this well-deserved recognition for your years of dedication to this film.