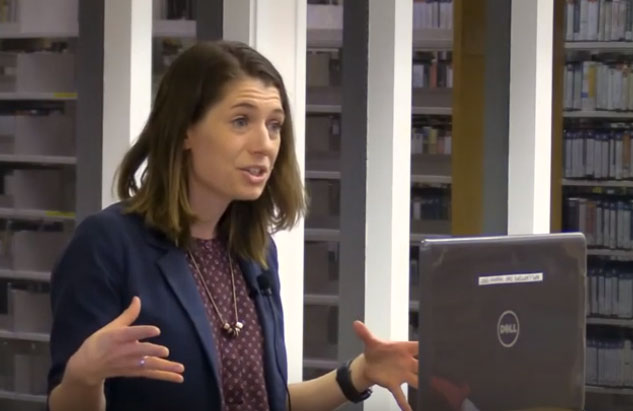 The Almanac reporter Kate Bradshaw uncovered an alarming statistic showing Atherton residents with an annual income of $240,000 would outlive neighboring East Palo Alto residents making $50,000 by 19 years. Bradshaw’s coverage for The Almanac usually focuses on affluent Menlo Park, but it was hard for her not to notice the inequalities found within the area. To better understand the origination and ultimately, the health effects caused by these inequalities, Bradshaw initiated a long-term research project titled “Uneven Ground.”

Bradshaw earned a scholarship for health reporting from USC Annenberg, which provided her with training and support to accomplish her project goals. “Uneven Ground” became a three-part reported series that was published in The Almanac and archived online. She also presented her findings at the Menlo Park Library, which was recorded by Midpen Media with funding from the R. Lacey Civic Engagement Initiative.

Bradshaw partnered with local high school journalists from within the communities she wanted to research North Fair Oaks, Belle Haven, and East Palo Alto. The students spoke Spanish and were able to get responses from community members. They asked questions like, “How many jobs do you have,” and “Have you ever delayed healthcare due to cost?” The biggest issue they found for people living in low-income areas was access to housing.

The Uneven Ground series focuses on three topic areas: how unequal land-use harms communities in southern San Mateo County; navigating food deserts and swamps; and chasing equity in a changing climate. Bradshaw’s archival research uncovered how housing discrimination in the 1950s was the foundation for the current racial makeup of the area and its connection with environmental health risks. She also looks at the availability of healthy foods and fresh produce, along with access to healthcare. Lastly, the series examines the disproportionate effects of climate change on the Peninsula’s lower-income communities.

The project found that steps are being taken to improve the health and living conditions of people in impacted areas. A new bike bridge was built over highway 101, which opened up resources on the other side of the freeway to a previously cut off community. Doctors are prescribing healthy food to people with diabetes and giving them access to food pantries with nutritious options.

In the wake of the COVID-19 pandemic, everyone is set back, but lower-income communities will likely take a harder hit. Bradshaw hasn’t had the opportunity to check in with people from within her project’s research areas but offers important observations. “Lower-income workers like restaurant employees or informal-economy workers are seeing demand for their jobs shrivel right now.”

“Another major impact is going to be the disparity that happens as school districts adopt different distance learning plans. Kids in households without internet access, who have to share a computer with siblings, are housing insecure and don’t have a good place to study, or whose parents have to work and can’t offer supervision for homeschooling right now are all likely going to face learning disadvantages compared to their more affluent peers.”