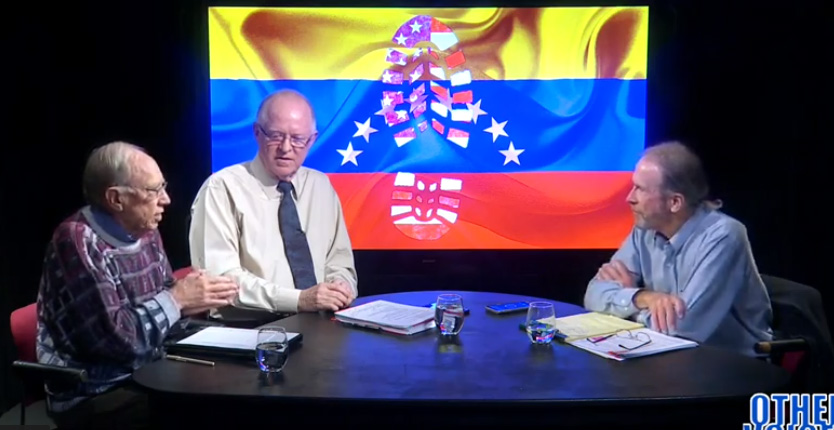 Confused about what’s going on in Venezuela right now? Snippets of blocked roadways with burning aid shipments, crowds of upset hungry protestors, and the power struggle between Nicolas Maduro and Juan Guaido flash across US mainstream media coverage. Peninsula Peace & Justice Center special Other Voices TV forum “The Real Venezuela Agenda” with Lee Artz, Director of the Center for Global Studies at Purdue University and Charlie Hardy, former priest who served in the Venezuela barrios give context for the country’s current struggles.

The show guests talk about the United States sanctions enforced since 2015 being equivalent to economic warfare on the government of Venezuela. These sanctions deny $30M a day, making it impossible for income to flow into the country and cutting off access to bank accounts. Against this dire backdrop the US has created an environment that looks like President Maduro is not doing a good job, although he is the democratically elected leader.

Mainstream US foreign press selectively frames information to present Guaido as the solution to the crisis. Other Voices guest, Lee Artz says that the US has to act soon to take advantage of the manufactured crisis because conditions will change, although he advocates for the US to get their hands off Venezuela, stop the sanctions and not to instigate a war.

Why is the US so involved with Venezuela in the first place? Artz thinks the country poses a “threat of a good example” where vast oil riches and wealth from natural resources are utilized for the good of the population instead of making a few people or businesses rich. Also, Venezuela’s democratic government structure is based on a participatory democracy where the government is accountable to people.

Watch Other Voices to find out more details the evening news isn’t covering about Venezuela.