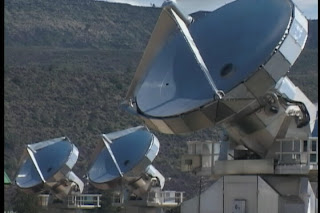 People have long been fascinated by the question of whether intelligent life exists on other planets. The SETI Institute has been trying to answer this question for the past 25 years, by using arrays of radio telescopes to scan the heavens looking for signals that seem to come from an intelligent source. This work is expensive, and most of the costs are paid for by private donors, including Microsoft co-founder Paul Allen and actress Jodie Foster, a long time fan of the SETI Institute who starred in the 1997 film “Contact” based on the SETI Institute’s work. Of course in the movie, unlike real life so far, they actually find their extraterrestrial intelligence.

This month’s Future Talk features an interview with Seth Shostak, Chief Astronomer of the SETI Institute with a Ph.D. in Astronomy from CalTech, who answers a broad range of questions from host Martin Wasserman about the SETI Institute’s work. Questions include: why are we so interested in knowing whether there’s intelligent life elsewhere? What scientific advances are speeding up the search? What would we do if we actually found evidence of extraterrestrial intelligence? And does the project have scientific value even if we don’t find what we’re looking for?

Seth is passionate about his work and gives a very lively and energetic interview. Also included are pictures of the telescope array, and images of the Kepler Mission, a NASA project that has already identified numerous planets that might be capable of sustaining life.

The playback times for this episode can be found here.

Previous episodes can be seen here.