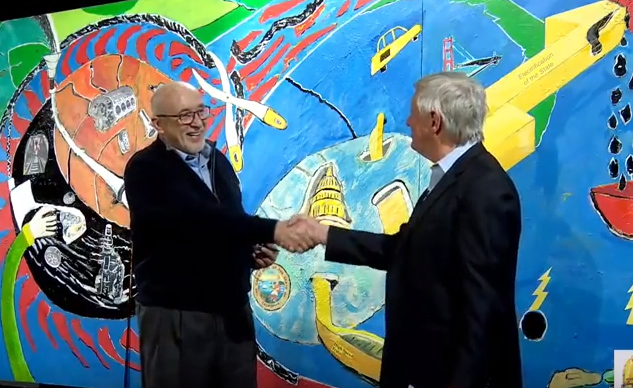 In preparation for the Silicon Valley Energy Summit 2018, Michael Killen interviews the event’s organizer Jim Sweeney on “The Michael Killen Report.”  At the event, industry leaders with backgrounds in electrification of vehicles, autonomous vehicles and personal mobility services will see if they can answer the question, “Will self-driving cars hurt the environment?” Sweeney is not sure of the answer himself and looks forward to the results of the debate. Another topic that will be discussed at the event is new energy technology and both its upside and downside. New business opportunities are expected to arise, such as efficient battery storage and the production of smaller transformers in support of electric vehicle charging infrastructure. But the industry will need to contend with sophisticated cybersecurity issues to prevent system shutdowns.

Three of Killen’s large-scale paintings illustrating California’s climate change goals will be on display at the event. One of which is featured on his show. The painting illustrates California’s goal to reduce petroleum use in the transportation sector by 50% by the year 2030. See Killen’s artwork up close and be a part of the energy conversation at the summit on June 21st.