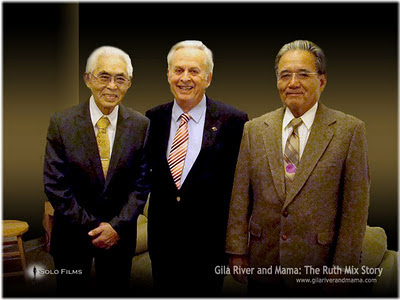 On February 19, 1942, President Franklin D. Roosevelt signed Executive Order 9066, authorizing the Secretary of War to designate certain areas as military zones.  This order paved the way for the unlawful incarceration of Japanese Americans in “relocation” camps.  This effectively ruined the lives of more than 120,000 American citizens and cast the dark shadow of racism across our country while our armed forces were ironically fighting fascism abroad.    After years of shame and silence around this dark page in our national history, the stories are emerging, often told by the children and grandchildren of the internees.  An unusual perspective will be unveiled this Saturday night at 8 pm on Channel 27 — that of a teenager whose experience as an aide in one of the camps changed her life forever.

The Media Center is proud to cablecast a documentary detailing the personal experience of fifteen year old Ruth Mix who volunteered at the Gila River Japanese Internment Camp’s Butte Camp Hospital.    During the summer of 1942, she moved into the camp to work full time with her mother who was a teacher there.
Charles Class, an established Media Center producer, served as one of three executive producers for “Gila River and Mama – The Ruth Mix Story.” The 49 minute documentary includes historical reenactment and tells  the moving story of Ruth and the people she met and befriended during her time living at the camp.
The documentary was produced, written and directed by Claire Mix, the daughter of Ruth and granddaughter of teacher Frida Mix.  it wasn’t until Claire was an adult that she became aware of her famlly’s passionate involvement in the lives of the internees at  Gila River.  Claire slowly teased the story out of her aging mother, who, along with Claire’s grandmother, had risked arrest in order to bring some relief to the suffering of the persecuted citizens at Gila River.
At this time of year when we celebrate the gift our veterans have given the nation, sacrificing their very lives, it is important that we remember Japanese Americans, many of whom wanted to serve their country, but instead were interned under most draconian and inhumane circumstances during World War II.
For additional playback times click here.
To learn more about this project visit the website:  http://www.gilariverandmama.com.
Funding for “Gila River And Mama:  The Ruth Mix Story” was provided by a grant from the California State Library through the California Civil Liberties Public Education Program.
The Media Center thanks Mr. Class for bringing this important story to us.  And we reach out and thank the California State Library and the California Civil Liberties Public Education Program for making this production possible.