Girls TV, a Media Center after school television elective at the 49ers Academy in East Palo Alto is featured in this month’s EPA Today! 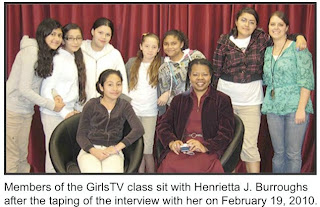 Becca Fisher runs this program twice a week, as well as Video Production and TV Production electives. Girls TV has produced two (close to) full-length shows this year that are currently running on Channel 28!

The girls were lucky enough to be able to interview Henrietta Burroughs, host of “Talking with Henrietta” produced at the Media Center and editor of the EPA Today newspaper, for a “Women in Media” segment. This segment was part of a larger curriculum aimed to get female students excited about careers that are typically male-dominated.

You can also watch the full interview with Henrietta as a segment in Episode 2 of Girls TV!