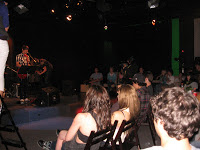 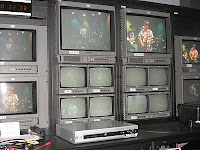 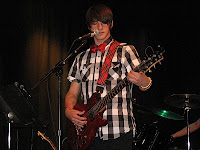 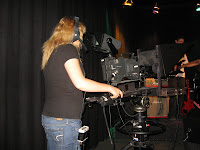 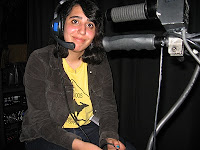 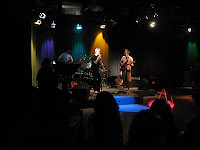 The Media Center keeps growing its High School Band and Open Mic program. This month we added more bands, more fans and more youth volunteers into the show. We’re doing these approximately monthly in an effort to open up the studio to more young people and present them with the flexibility and possibilities of what we’re doing over here. We’re here to enable people — in this instance – young people to use our studios as a platform for creative and artistic expression. Hopefully some of the youth who perform and some who come to watch will check out our youth programs and get involved beyond the one night visit.

But beyond that and maybe even more important than that: we all had a great time last night. We had four bands and two rappers from almost as many high schools – Palo Alto, Mountain View, Los Altos and Kehillah High Schools all had representation here — which is great. It shows how we’re pushing out the boundaries of who we reach. And they each brought a good draw. A majority of band members and fans stuck around for the entire evening.
The evening would not have been the success it was without first and foremost the Youth Executive Producer, Riley Smith. Riley’s a student at Paly and is also the vocalist and front man for featured band Thank You For Asking. Riley put together the line up and interfaced with the bands, set up the Facebook events page and got 70 people to say they would come — which they did — and then some. He emcee’d for us and kept the bands on schedule. Great job, Riley! Thank you for making it happen here.
We were not planning on producing much video but we’re a video outfit and once we set up one camera for a facebook ustream feed. well it was easy to set up a tethered roving camera and then why not set up Camera 1 in the studio? And those cameras were operated by Media Center Youth Interns and Youth Council Members Daria, Laura and Layla. These young women did a great job of getting the live facebook feed some great shots. So we did pop some blank tapes into the recorder and veteran youth volunteer and Intern Wes Rapaport popped the head phones on in the control room and effectively directed and live switched the evening for us — a three hour job. And this was after Wes had lit the studio for us, one spot at a time. Thanks Wes!
Running the front, I was monitoring the Facebook livefeed and at one point we had 36 viewers. That was really cool. Now, I’m staring at six tapes from the control room and two tapes from the roving camera. I’ll be recruiting more youth volunteers to turn them into clips that we can put on our channels and share with the bands.
In the studio, the evening opened with Tricky Zipper featuring Jack, Andrew, Connor and Max, followed by Surculiso with Harry, Adam, Jeff all out of Los Alto High school.
Then we had rapper Arian aka R.E.N. out of Mountain View High who gave us some provocative lyrics to think about and provided a nice break between the bands.
And penultimate band, Idea Machine featuring Ben, Scotty, Will and Beau with vocalist Helen sang a strong set of covers for us before turning it over to Thank You For Asking to close out the evening.
Finally, some strong shout outs to MC volunteer Scott Van Duyne who mic’d the bands ran the audio board and to youth services coordinator Becca Fisher for providing the volunteers and other materiel support. Last night’s event was brought to us by the generosity of the Media Center’s Executive Director Annie Folger backed by the Board who believe in building a strong youth program here.
If you are an organized, motivated young person and want to produce a band night here email becky@midpenmedia.org! Or if you’re in a high school band and want experience performing here, send me an email.
Hey and we’re looking for a name for the event. Some suggestions:
The Mix
The Blend
Media Center Band Night
The Sound Lounge
Media Center Fresh out of Fall Band Night
We’re looking for a name that helps us get our brand out there, is descriptive and can be reused! Help us out here!