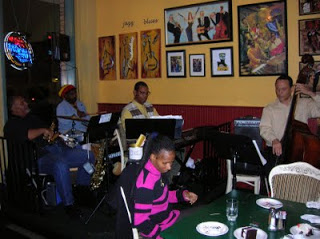 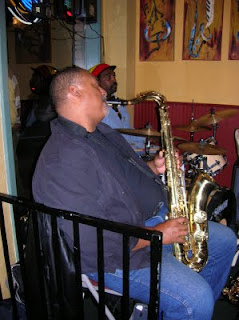 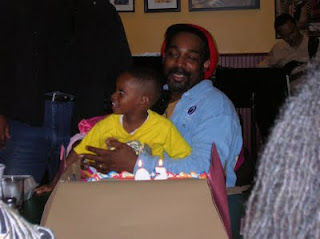 This afternoon, I noticed a late breaking piece on Jesse Norfleet’s Facebook Page: Join him and friends at Micha’s in San Carlos. So I ran up there with my husband Scott. We walk in and see Jesse’s lovely family including 5 adorable grandchildren. I also see many politterati of East Palo Alto. I see my boss and Jesse’s old boss, Annie Folger and our office manager and voiceover artist Dave Sorokach. Jesse and his wife Renee have provided the company with an excellent repast of chicken, beans, collards, corn bread, and Spanish rice. And of course there is a giant cake which Jesse blew out in tandem with Caleb, his grandson who was also born on this day, five years ago.

I am grateful to Jesse. If he hadn’t left the Media Center two years ago I would not have this great job, I have now. Thank you, Jesse, I owe you so much! And you stuck around and trained me and kept taking my countless calls that all began with “How do I…” I am well aware that there is no way I could ever do all that Jesse did here. And people who haven’t been here in a while still walk in with a look of shock and dismay when they see me at Jesse’s desk. Jesse is well he just is…

Anyway, during all the festivities, Jesse’s band Equanimous Jones played more or less continuously. Band members might have to nip out for some cake or a phone call but they pretty much filled Micha’s with great renditions of standards out of the Real book. Jesse kept everyone on lockdown with his solid stick work on the drums. Tommy Myers was a blow away on soprano and tenor sax. Melvin Arterberry Jr. looked really cool and laid back on the Roland, except that his fingers were doing everything from the slow grace to the fast pace, and finally Paul Collins was solid on both electric and stand up bass.

For me, their last song Yesterday by the Beatles was just amazing. The best I’d ever heard Yesterday in a jazz format. It’s such a great tune anyway, but Tommy just poured it on with that soprano and the band matched him so well and were so tight, well… it was a strange surprise… to go to Jesse’s birthday party and be given so beautiful a present to take home.

Happy Birthday Jesse, and many happy returns of the day from your friends at the Media Center!