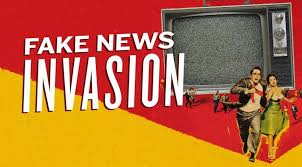 This past month in Midpen’s studio, the German American Business Association hosted a panel discussion featuring journalists and media experts from both Germany and the US to discuss the future of content, specifically the state of news media. Hosted by Pamela Lenz Sommer, GABA’s Co-Chair for its Media & Entertainment Industry Group, this program explored among many topics the state of journalism and current journalism standards.  The result of this lively discussion is a 50 minute program now airing on our channels and streaming on the web.

A running thread through the conversation was the reality of fake news in the media. Over the last 20 years, the Internet has overrun the morning paper as well as the evening newscast with a smorgasbord of information sources, and has taken the “marketplace of ideas” to a whole new level. One disheartening byproduct of the flood of content on the Internet is our own tendency to accept information that confirms our ideas, and reject those viewpoints that do not. If we are exposed to information we do not like, we can easily get access to something more pleasing. All that matters is whether the presented information fits our narrative.

The problem with seeking out our tailor-made echo-chamber is that we miss the opportunity to expose ourselves to other perspectives, even if they may be uncomfortable. Not taking in another perspective isolates us from one another and creates a divide among the population, a divide that can be exploited for political gain fueled by propaganda.

Since in today’s media landscape anyone can call themselves a journalist, unchecked news has the potential to spread online at unprecedented speed. Information that appears reliable and trustworthy be entirely contrived. With print media there was a process by which facts could be checked and the delivery of news was “slower”. With the advent of the Internet and social media platforms, the rush to break a story may trump fact checking. Opinions are spread, disguised as facts. These new content realities have shown their potential to overturn not only political power structures but entire social belief systems.

The future of content, particularly news produced by trained journalist adhering to industry standards, has gained new importance considering the recent US election and more elections coming up in Europe this year. The panel has concerns that the current media climate in the US could influence democracies around the world.