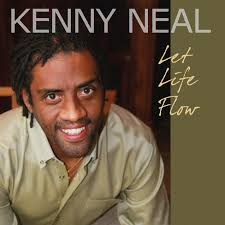 Kenny Neal won the 2009 Blue Music Awards Song of the Year for “Let Life Flow,” the title cut on his upcoming CD. Kenny was also named the Monterey Bay Blues Musician of the Year. These awards are the culmination and the continuation of a life devoted to the Blues. Here at the Media Center we are having a mini-Kenny Neal Festival. We kicked this celebration off with a screening of the documentary “American Blues Man” on Saturday July 24 here in the studio. The documentary features interviews with Kenny with video footage and photographs from Kenny’s fascinating life on and off the stage. The documentary was produced by Kenny and his wife Josi, and was shot with the assistance of many devoted Media Center volunteers including sound engineer Eric Baker. It was edited by Media Center diehard “TD Daniell” and Karen Adams served as Production Manager. A screening was also held in Berkeley in August.
By special arrangement we are able to bring you American Blues Man. In addition to running American Blues Man, the Media Center is also featuring Kenny on the most recent episode of “American Songwriter”. And of course, the Media Center continues to carry Kenny’s own show, the award winning “Neal’s Place” produced right here. Click here for a complete listing of all the shows featuring Kenny Neal.
An ironic twist to all this, is that if you’ve got the Blues yourself, you might want to watch “American Blues Man” to lift your spirits. Kenny has weathered life’s vicissitudes with grace and hope and charity. His story is an inspiration. We are proud that the Media Center is able to showcase the life and music of this internationally respected and beloved blue artist.