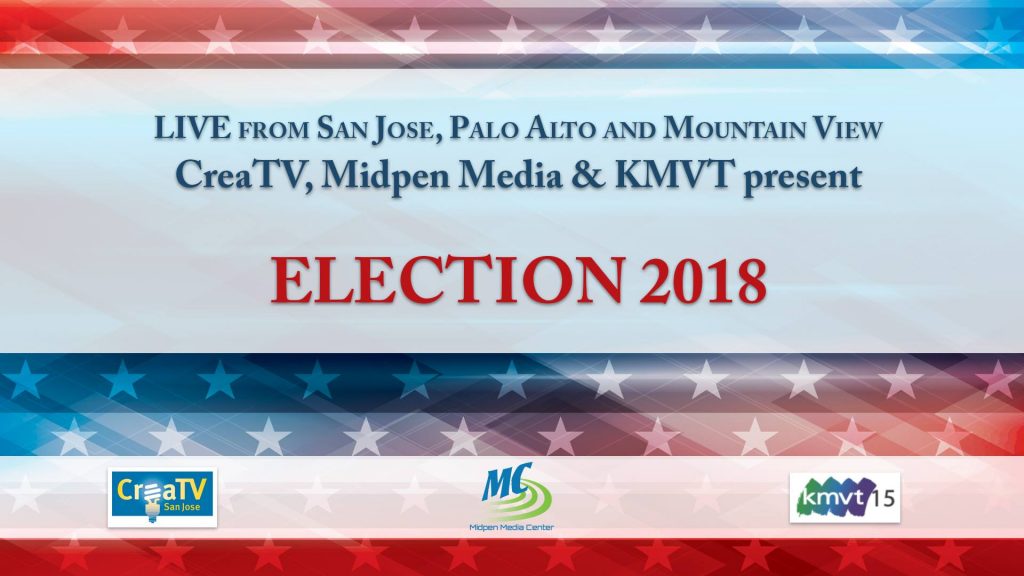 As Peninsula and Silicon Valley voters cast their ballots in the November 6th midterm elections, three cable access stations came together to cover the momentous turnout with two hours of live election coverage. KMVT 15 Silicon Valley Community Media, CreaTV San Jose, and the Midpen Media Center in Palo Alto each produced live studio segments for broadcast on cable channel 27. In preparation for the live show, the executive directors of each media center worked together to design the show three weeks before election day. Studio tech departments worked together to test logistics and equipment, while show producers rounded up hosts and guests, and finalized set design.
The live election coverage began in the KMVT 15 studio with interviews of current candidates in local level races. Precinct voter return slides were presented between segments courtesy of Midpen.

Studio shows shot at the Midpen Media Center are rarely broadcast live because the content doesn’t usually require it. So for longtime producer Becky Sanders the experience of broadcasting live was a challenge and a rush. Sanders’ excitement soon turned to frustration when the 8:40 p.m. segment ran into transmission problems. Engineer Chris Pearce, in coordination with studio technicians, was able to solve the issue after some troubleshooting.

The midterm election coverage was the first time Midpen, KMVT and CreaTV coordinated to push out content together to create a live broadcast. The event was a learning experience all around for the producers, crew members, and the media centers. Show guests had a great time talking about the issues in a live setting according to Sanders who reported a party atmosphere in-studio. After lining up all of the parts, going through the disappointments, and enjoying the rewards, Sanders’ likened doing a live show to putting on a wedding, in the end, it’s done, and everyone goes home happy.