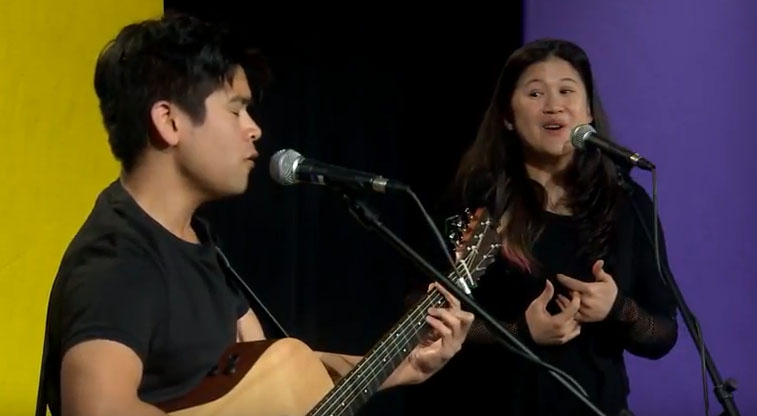 The 2018 season of West Coast Songwriters (WCS) competition is underway at Midpen Media Center. On the third Monday of the month songwriters from the Palo Alto WCS chapter gather at the studio. Musicians at all career levels- jittery newbie to seasoned pro – perform before studio cameras, bright lights, live audience and industry judges. Once the last song has been sung the judges deliberate to confirm the best song and the best performance of the night.

Participants get real world performance experience in an incubator atmosphere. WCS chapters bring songwriters together for collaboration, exposure to a variety of performance settings and opportunities to meet industry insiders.

Pete Sommer, the manager of the Palo Alto branch and show producer at Midpen says, “WCS is a good introduction, a soft landing and a spot for people to really excel. Musicians can do whatever their focus is whether they want to be a co-writer, a performer or are vying to be a star.”
The Palo Alto chapter’s performance space is the Midpen Media Center studio. Other chapters claim coffee houses, concert halls and fancy restaurants as their home base. “Part of the educational portion of WCS,” says Sommer, “is to have different venues the performers can perform at.” Musicians are welcome to travel around to other WCS spaces to give them a try. Sommer goes on to say that “Performing in front of a live audience as well as in front of a camera would be part of their professional career.”

Musicians get to know each other through monthly WCS gatherings. Knowledgeable industry judges are also in the room eager to share advice and maybe even connections. Sommer has seen musicians develop successful collaborations, deepening their musical experience together. The competition judges can be music producers, recording engineers or even music scouts for movies. Some of the WCS attendees got their songs placed into movies just by showing up and playing in front of the right judges!

New this year to Midpen Media Center – WCS show are hosts Renee Richardson and “Irish” Greg McQuaid. Long-time hosts of KFOG’s morning show now produce a popular entertainment podcast Pop Up!. Sommer ran into the duo at a music industry convention and invited them to be the new hosts of WCS. The first time out, McQuaid hosted solo and Sommer says he did a phenomenal job. WCS is looking forward to having Richardson join in the next round.

Songwriters who participate in WCS gain an opportunity to make connections that can help launch their careers. Sommer says that the yearly WCS conference in September is a great place to find music industry connections. Ken Caillat, producer of Fleetwood Mac’s Rumors album, is available to listen to songwriter performances. Mira Goto, a Palo Alto chapter member has been working with Caillat for the past two years. The “Best Song” winner of the February Midpen Media Center show, Courtney Farren has been on tour in Europe and New York this past year. Scott Bell, is continuing his musical success meeting new connections through WCS, recently opening for a Country artist at Club Rodeo.

If you’re an aspiring songwriter visit your local WCS branch live performances. “It’s a very nurturing environment and easy way to get support going for you,” says Sommer. Check out the new season of musical talent in the February and March episodes of West Coast Songwriters.