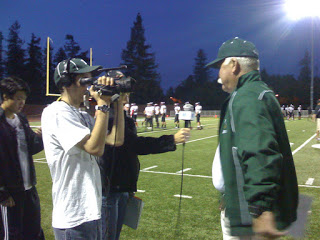 Friday Night, Media Center staff and volunteers shot the big game: Palo Alto High School v. Gunn High School. This game between crosstown rivals is one of the most attended games in local sports and is always hotly contested. The shoot was made possible by Bobby Chastain of KMVT in Mountain View who graciously brought his “bread truck” with seasoned volunteer Lisa Tesler and Mr. Replay Tom Clark. Bobby worked with new-to-sportscasting MC volunteers Barbara Breuchert, Joseph Kautz, Ryan Wong (and me!) plus with seasoned MC volunteer and intern, Wes Rapaport. Bobby provided valuable training to our volunteers in field camera operation for sports plus cable wrangling for the roving camera on the sideline. And of course the breaking down part is always a challenge. Can 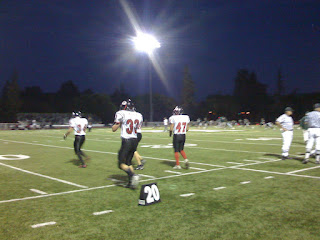 we get all the equipment put away before the stadium lights go dark?
Wes ran the sideline camera with help managing the cable from Joseph and Ryan. Both Ryan and Joseph got a crack at the sideline camera which can be dangerous and exciting if you get too close to the action — never turn your back on the field, by the way. 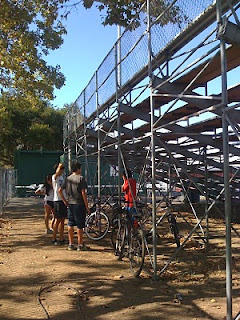 Wes was pretty fearless stomping through players and coaches for camera position and got us some great close up shots. Barbara ran Camera 2 which got the medium shots, groups of players at the snap and during the play, and Lisa atop the announcers booth ran game camera and always tracked the ball and the action.
Bobby did the directing and live switching in the truck while Mr. Replay took the feed from all three cameras into his 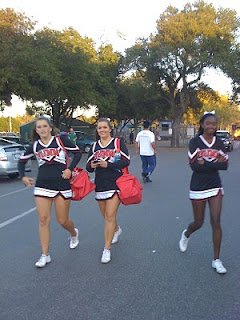 software program and was able to provide the choicest shots for automatic real time play back. It was a very cool night.
Bobby and his team shoot maybe 70 sports events a year as
part of their contract with the cities of Mountain View and Los Altos. He provides these games to us to run on our 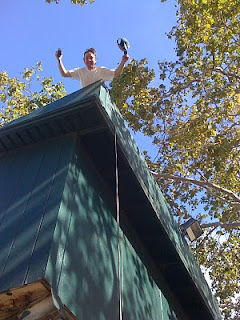 station. He says he’ll help train sports volunteers at the Media Center. Sweet! We do have our own bread truck, so
what would it take to get our own volunteer sports coverage team off the ground. Maybe we’ll find out this coming year! In the meantime, the shoot was fun, informative and team building. It’s hard work but so gratifying
when the kids come up and want to know when it’s going to be on TV and how they can get copies.
So by the way you can watch the football game today at 2:30 on Channel 28 plus the following times. Check back as we schedule more playbacks during the coming weeks.
(pictures courtesy of Barbara Breuchert)

One thought on “MC and KMVT Co-Produced the Paly-Gunn Game!”