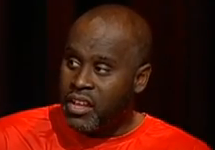 The Media Center is saddened and shocked to announce the death of a Studio producer.  Terrance Abdullah was 43 when he was killed on the Dumbarton Bridge on Tuesday.  His car was stalled and was hit from behind by another car.  We grieve along with community of East Palo Alto where his family and many friends live and where he visited often.
A resident of Fremont, Terrance Abdullah was a most interesting fellow.  He had survived the backstory that plagues too many of our young males of color – drop out, drugs and incarceration.   With a singleness of purpose he overcame all of that.  A small business owner, he devoted himself to transforming his life and influencing his community to work for change.  Earlier this month he produced his first and only episode of BRIDGING THE CORPORATE GAP.   The show addresses the lack of people of color in the Silicon Valley workforce and the patterns that perpetuate this glaring omission — including not only ongoing racial prejudice and the educational/economic divide, but even the mindset of a child who learns early to self-limit expectations.    The guests on this – the only episode that will be produced – are a retired educator from DeAnza and the head of Job Train, two of Terrence’s own mentors along his road to self actualization.
I knew Mr. Abdullah (called affectionately Tip – by his friends) only professionally.  I can assure you that I never got to call him Tip!  In fact, I  knew very little of his background until I read the articles about him.   What I did know of Terrance:  he was the kind of guy that will push whatever and whoever to get the job done, to do what he knows is right.  Having a conversation with him was at times like going several rounds with a well matched sparring partner.  And to his credit he always seemed to get what he wanted out of me!   He was always polite but forceful and dogged.   That’s the making of a good producer.  He was bright, passionate and determined to fulfill his vision.  Why he is no longer with us baffles and grieves us here at the Media Center.
Terrance’s untimely and completely unnecessary death is a very sad reminder that we are all so fragile here, and a call to rededicate our own lives to doing what really matters to us… like Terrence was doing, up until the very moment he left us.

To learn more about the life and times of Terrance Abdullah, please read Henrietta Bourrough’s thoughtful article in her online and print publication EPA Today.