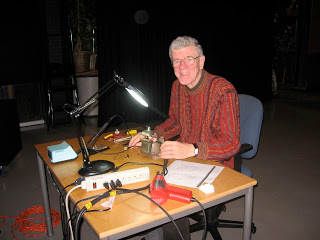 The last few weeks, staff and board members have been turning up in odd places doing unexpected things that benefit the infrastructure of the Media Center and make things run more smoothly.   The average Media Center producer and patron might not know about the kinds of things that go on behind the scenes to keep this place tip top.  Check out these few items…

A few weeks ago several staff members were caught up on the roof, clearing away the detritus from the old parking lot trees that was clogging some of our vents and in general decomposing on top of our solar panels and making a general nuisance.  We could have called in some pro roof cleaners, but Annie wanted to get the job done before the new parking lot went in.  A strong wind might have carried the debris down to the new pavement and then we’d have little leaf fossils everywhere.  Well it didn’t happen did it?  Thanks to our sneaky MC Staff.

You see our gorgeous new parking lot?  Well, Annie pretty much managed that project sans hard hat.   JP Paving and Grading did a bang up job, but partly because in this humble writer’s opinion, Annie managed them for success.  I never saw that stencil with the name “Becky” on it that I directed the JP fellas to get however.  I thought they were going to demarcate that new little compact slot right by the studio entrance for me!

And then after the parking lot went in and dried for umpteenth days and hours, you know what happened… tar appeared on the studio floor anyway… so there were Lupita and Annie using that amazing “cleanitall”, Goo Gone, on the studio floor.    Now it’s back to its former pristine self!

And then finally, what about the “blue channel” that went renegade on Studio Camera 3 last week?  With that wire broken the feed from Camera 3 was literally “off color” and couldn’t be used.  A patched together work around could only hold but so long, so it was Board Member Andrew Mellows to the rescue! He identified the culprit before even pulling apart the mass of cables.  He knew what to look for and he found it… the little blue wire had come apart and had to be reattached.  Andrew set up a workshop in the studio and blithely restored the cable to its fully functional self.

We do spend a lot of time at our desks designing programs, sending emails and writing up action items and position papers, but when push comes to shove around here, staff and board members pull together to do the heavy lifting.  I am proud of our hands-on staff and board members; they know when to roll their sleeves up and get busy.