The Dalai Lama visited many Bay Area venues over the past few days, including Costano Elementary/49ers Academy in East Palo Alto! Many middle school and high school students from the EPA/Menlo Park area were in attendance, as well as some VIPs who have been supportive of the Ravenswood School District. His Holiness answered a handful of questions from local youth and was incredibly gracious and jovial in his responses. Before he spoke, Matthew Sloan of the Living Wisdom School of Palo Alto led his students and Tibetan performers in a pre-show that celebrated the history and culture of Tibet and the Dalai Lama’s legacy. 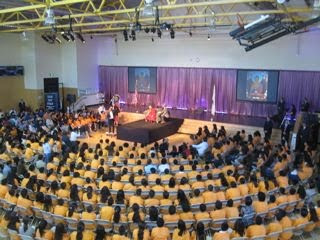 The kicker is that the Media Center had exclusive LIVE coverage of the event! The event was broadcast live on Channel 30 and the web and was filmed by the Media Center’s own Annie Folger, Chris Pearce, Lupita Segura and Becca Fisher and was directed by Jesse Norfleet! The energy was amazing and I, personally, was so grateful to have been present. We sported our Media Center t-shirts and represented public access front and center while the network crews filmed from the back of the room!

The Dalai Lama’s visit was inspired by a curriculum of compassion he hopes to spread around schools in the Bay Area. The students have been learning about the Dalai Lama’s history to prepare for his arrival and when His Holiness finally came, the students were glowing. Their questions, such as, “Do you ever have a bad day and, if so, how do you cheer yourself up?” and “If you could change one thing in your life, what would it be?” were challenging and insightful and his answers were honest and open in the best way. He laughed with and inspired the students. He talked about how education was hard for him and how it took him a while to realize education is more than books and tests, it is about going deeper. It was a beautiful thing to watch!

If you missed the event live, there are multiple playback time scheduled for next week. Follow this link to our searchable playback schedule!