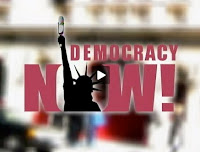 Democracy Now! is broadcast live at 8am EDT, 5am PDT. The Media Center cablecasts Democracy Now! at 9am PDT, and at several other times through the day. The program is also archived on the website of Democracy Now!