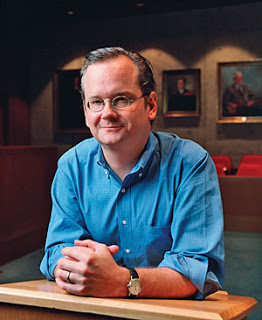 Here’s an opportunity to hear an expert on copyright and fair use – and an activist for copyright policy change. On February 25 the Media Center will be a viewing site for a live webcast from Harvard Law School with Professor Lawrence Lessig.

The webcast will include Lessig’s presentation followed by a panel discussion. Panelists to include: Chris Coleman, Jonny 5, Laleh Mehran and Derigan Silver. Following the panel, the Media Center staff will be on hand to field specific copyright and fair use questions.

Lessig’s talk will explore copyright in the digital age and the importance of the fair use doctrine for free expression on the Internet.

Chris Coleman is a digital artist and educator who uses numerous technological tools to share ideas. He has been teaching Processing for three years to Undergraduate and Graduate students and presented his research on the topic of “Interfacing GOOD Information” at the FlashBelt conference in Minneapolis. The research dealt with inviting people to experience information about the good being done in the world (like work on sustainable energy solutions) both visually and spatially. His work has been showcased in museums, galleries and festivals in nearly 20 countries, and one of his software tools (maxuino) has been downloaded 4000 times by people in 58 countries. He is currently Assistant Professor and Director of Graduate Studies in DU’s Digital Media Studies Program.

Jonny 5 Jonny 5 is a writer, educator, and former high-school counselor, better known as the lead-MC and founding member of the Flobots. Currently signed to a multi-record deal with Universal Republic, the Flobots’ third album, Survival Story, will be released in March, 2010. While the songs and videos released by Universal have tight copyright restrictions, Jamie has also participated in a number of alternative projects, including his current “Rhyme of the Day” effort to share a new rap/verse every single day of 2010 on YouTube: http://www.youtube.com/user/flobot5

Laleh Mehran is the progeny of Iranian scientists, with a complex relationship to religion, science and politics. Her work is of necessity as veiled as it is explicit, as personal as it is political and as critical as it is tolerant. Laleh received her MFA from Carnegie Mellon University in Electronic Time-Based Media. Her work has been shown individually and as part of art collectives at the Next 5 Minutes 4 Tactical Media Festival in Amsterdam, Holland; the European Media Arts Festival in Osnabruck, Germany; Ponte Futura in Cortona Itlay; Massachusetts Museum of Contemporary Art in North Adams, MA; the Carnegie Museum of Art; The Georgia Museum of Art; and The Andy Warhol Museum. Currently, she is an Associate Professor and Graduate Director of the Electronic Media Arts & Design program at the University of Denver.

Derigan Silver is an assistant professor in the Department of Media, Film and Journalism Studies at the University of Denver. He teaches courses on First Amendment law, media law, and Internet law and regulation. He is the author of several book chapters and journal articles, and his new book, National Security in the Courts: The Requirements of Transparency vs. the Need for Secrecy, will be coming out later this year.