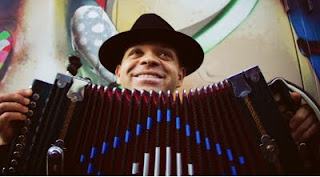 The Midpeninsula Community Media Center is hosting a party on Sunday, September 25, 2011 from 1-5 pm to celebrate the national award the Center recently received from the Alliance for Community Media (ACM). The Media Center is number one among 3,000 community media and public access facilities nationwide.  The Media Center was awarded the prestigious “Overall Excellence in Combined Public, Education and Government Access” at the national ACM conference held in Tucson this past July.  The Media Center invites members of the community to celebrate this achievement and to honor the efforts of the volunteers who make it all possible.
The Media Center will be taping the Andre Thierry Zydeco Band who will be performing between 2- 4:30.  There will be dance lessons and dancing in the cordoned off parking lot.  Additionally, there will be tours and hands-on demonstrations of camera operation, lighting, editing, and animation, some of the production skills one can learn through the Media Center.  Plus the reel that the Media Center produced that propelled the Center to “best station in the nation” will be running continuously in the Studio.   There will be catered refreshments and drawings for free classes and services.
To top it off Mayor Sid Espinosa will join Media Center Executive Director, Annie Folger, her staff and Board in honoring the cadre of volunteers who are the heart and soul of the Media Center operations with a short but meaningful ceremony.   It is the Media Center’s volunteer producers and crew members who create the majority of the programming that populates the Media Center’s five cable channels that are simultaneously streamed from the Media Center’s website.
This event is free and open to the public.  The favor of a reply is requested:  RSVP to 650-494-8686
Event Details:
Community Open House to Celebrate National Award and the Contributions of Volunteers’ Time and Talent and Treasure
Sunday, September 25, 2011
1 pm-5 pm
Midpeninsula Community Media Center
900 San Antonio Road
Palo Alto, CA  94306
www.midpenmedia.org
650-494-8686
Cost=Free