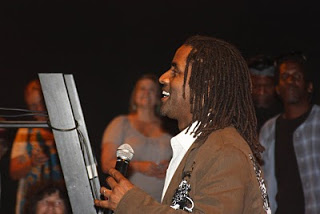 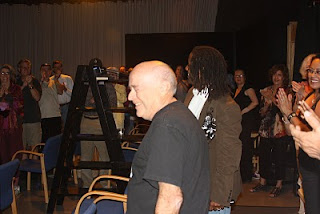 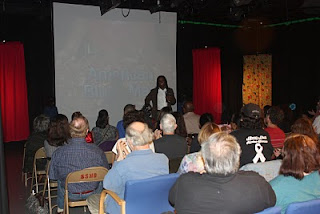 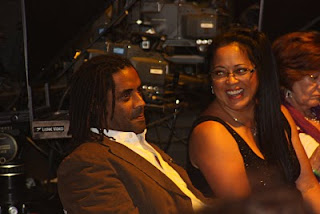 The August-September edition of Henrietta Burrough’s newspaper EPA TODAY has been on the stands for a few weeks now, but I wanted to draw your attention to an excellent article that EPA TODAY editor Ms. Burroughs penned herself in the Arts column: “American Blues Man is a Touching and Memorable Show”, on page 18. Ms. Burroughs attended the world debut screening of “American Blues Man” here in the Media Center Studios on July 24. The documentary profiles the life of Kenny Neal, a Louisiana-born, but locally-based internationally known blues artist. His struggles and achievements as well as his music make for great story telling. In her article, Ms. Burroughs recounts the details of the party and the screening, describes Kenny’s life and then the making of the documentary. “American Blues Man” was shot here in the Media Center Studios, produced by Kenny and his wife Josi Neal and edited by Tom “TD” Daniell, a family friend and long time Media Center volunteer. We are proud that we are able to cablecast American Blues Man. Follow the link to see the current schedule for American Blues Man. And we congratulate Ms. Burroughs for her thoughtful story about this Blues icon.
Ms. Burroughs, as well as editing the newspaper, produces a biweekly show called “Talking With Henrietta” right here in our studios. A talk show format, Talking with Henrietta often tackles tough topics of interest to the citizenry of East Palo Alto and her sister communities here in the Midpeninsula. Follow this link to see the current schedule for Talking with Henrietta.
(Pictured above: Kenny Neal addresses the audience, Kenny with TD, and Kenny and his wife Josi Neal. Photos courtesy of Wes Rapaport.)