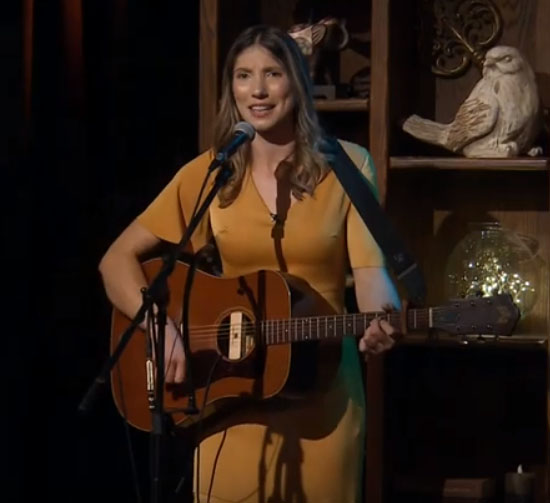 As you listen to a song for the first or the hundredth time, do you find yourself wondering how the songwriter came up with those lyrics? Debut Midpen Media show, “Never Had I Ever, A Songwriter Showcase of Epic (and Everyday) Firsts,” unveils the stories behind a handful of songs written by three Bay Area musicians. Eva Glasrud, stage name Eva Via, created the show as a way to celebrate local songwriters.

Equipped with new production skills after completing Midpen Media’s studio production workshop, Eva began developing a concept for her show that would attract a large viewership. “I wanted something specific enough that we had a solid theme going, but malleable enough that songwriters can still play whatever songs they feel best showcase their talent, without feeling limited by the prompt,” says Glasrud. She landed on a version of the classic drinking game “Never Have I Ever,” but in this case musicians introduce their original songs with a story beginning with the phrase “Never had I ever…”

Musicians Trűco and Hunter Swan join Eva Via on the studio stage to share their music stories on the first episode of “Never Had I Ever.” As each singer-songwriter introduced the inspirational story behind their song lyrics, the musicians support each other with positive feedback and compare notes on their songwriting processes. The listening audience is able to take into consideration the songwriter’s life situation and feelings at the time of writing the song to connect with the meaning on a deeper level. By having the musicians and audience identify the “exciting first” of each song, Glasrud helps us capture a feeling of happiness or at least of adventure in the unknown.

Trűco performed first and told a story about not having fallen in love yet that led to the writing of his song, “Feeling Out.” His performance style is full of musical dynamics including a drum solo on the face of his guitar along with lots of vocal variation. Hunter Swan, an American Ninja Warrior competitor, is developing an album of sarcastic songs, one of which he performed on the show, “Undying Love.” Inspired by a family friend who came back from the dead, the song uses sweetly sung tongue-in-cheek macabre lyrics. Glasrud shares a few of her self-aware songs crafted after disappointing moments. Her song “Jefferson” speaks about her desire to protect her cherished memories and feelings of Washington DC despite the unpleasant Trump era.

Because of the knowledgeable support Glasrud received up to and during the production of her first show from Midpen Media staff and volunteers, she’s excited to come back to do another show in early 2020. “I couldn’t believe how talented everyone was,” Glasrud says of her volunteer crew. “It was so helpful to hear their thoughts and experiences as a first-time producer.”

If you want to learn how to produce a show of your own or want to help out on existing shows, consider taking Midpen Media’s Studio Production Basics Workshop to get started.