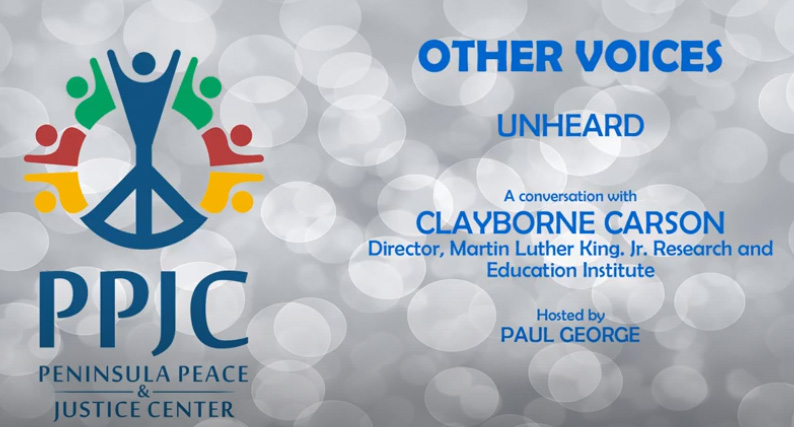 Peninsula Peace and Justice Center (PPJC) has transitioned its thought-provoking television series, “Other Voices,” to internet video production, and continues to cover important issues arising during the pandemic. Sustained national and worldwide protests mobilized in response to the police killing of George Floyd and ongoing police violence against Black people. PPJC’s Paul George interviewed Stanford University historian and Martin Luther King, Jr. scholar Dr. Clayborne Carson to discuss who the protest organizers are and who is responsible for making meaningful change.

In many cases, high school and college-age youth took the lead and put calls out to their communities over social media to organize grassroots level protests. Dr. Carson expressed his gratitude to the young people for putting the protest movement into action. Similarly, during the civil rights movement, the youth were the risk-takers who put their bodies on the line and pushed leaders like King to action. Dr. Carson notes that the recent protest movement that reached across the country saw participation numbers that eclipsed the twenty thousand strong March on Washington in 1963.

The role of older people in positions of institutionalized power is to translate the demands of the protesters into change. Dr. Carson says, “We are damaging the next generation by handing them a world in which they really have a lot of debt and little opportunity.” Organizations are now reflecting on how they can make effective changes that will make the country better. Older people can teach younger people how and why the system is rigged, what can be done to make it fair, and turn the protesters’ discontent into reforms and legislation.