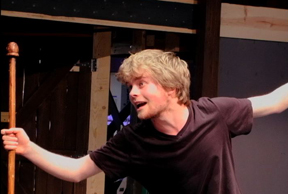 There’s no shortage of live theatre on the San Francisco Peninsula. Plays, musicals, and opera. Modern and classical. Professional and amateur. Peninsula Backstage brings in the people behind upcoming shows to talk about them. Tune in and find out what’s going on in our world of theatre.

Our Current Episode
On January 11th, we taped an episode featuring The Tabard Theatre Company’s production of The 39 Steps by Patrick Barlow, which won two Tony awards in 2008. The show is running from February 7th through March 1st at the Tabard Theatre in San Jose.

Peninsula Backstage host Nina G. Perry interviewed the director and all four actors about this zany show, which is a comedy based on the 1935 Alfred Hitchcock film of the same name. The episode includes an exciting scene performed by the cast. It takes place on a moving train!

It was a smooth shoot, except that Nina flubbed a line in her opening monologue! It was a good thing that the play being featured was a comedy, because the gaffe was quite comical.

And remember to go out and support local, live theatre!