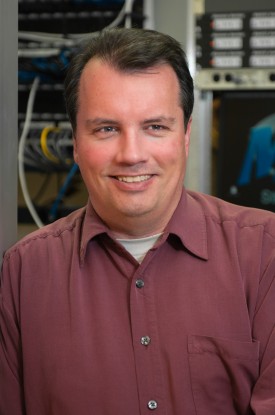 Chris is in charge of technology at the Media Center.

He grew up in London, England and obtained a B.S. in Computer Science from the University of York in the north of England. He has lived and worked in the US since graduating in 1984, initially in Boston, MA and locally on the peninsula since 1991. His first job after college was as a software engineer, part of a small team working on one of the earliest non-linear video editing systems, the Montage Picture Processor, which was used to edit numerous prime-time Hollywood TV shows such as Star Trek: The Next Generation, The Wonder Years and McGyver. Later, it was used to edit several feature films, including Stanley Kubrick’s Full Metal Jacket and Francis Coppolla’s Godfather III.

He subsequently worked for Ampex in Redwood City, writing control software for a digital video production switcher and a family of high-capacity data and instrumentation recorders. He sometimes wonders if his career is moving in the right direction.

Chris lives in Redwood Shores with his Czech wife Svata. He always splits aces and eights and usually doubles down on ten and eleven.