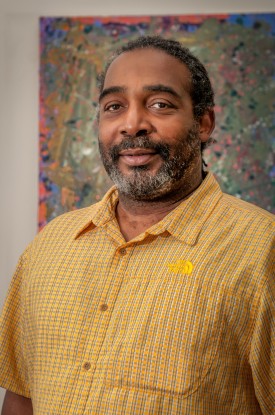 Jesse Norfleet is the Director of Programs for Midpen Media. One of his primary tasks is to work with youth, particularly those who are underserved and under-resourced, to get more involved in using video and technology as an empowerment tool, and giving them a voice. He also reaches out to local non-profit organizations to help and encourage them to use these same tools and our channels to tell their stories and highlight the work that they do.

While his position is a relatively new one, developed in Sept. 2014, Jesse previously did a 12-year stint with the Midpen Media. During that time, he taught field and studio production, was a staff producer and served as Programming Director for 6 years. His production honors include numerous W.A.V.E. and Hometown Awards as either a Producer or Director.

While TV and Video production have been a major part of his life, Jesse’s life passion has been to help develop youth, both academically and socially. He believes all children, should have the opportunity to pursue their passions, and to have a healthy productive life. He has over 16 years of working in youth development and education. Most recently he served as the Student Life Director for College Track East Palo Alto from 2007 – 2014. Other jobs have included teaching in public and private schools, and serving as a Director for the Leadership Training Academy and the Black Male Rebirth Project, both organizations based in East Palo Alto, CA.

An avid music lover, Jesse has played with the Potential Jazz Ensemble since 1983. Although a long time Bay area resident, Jesse stills call Memphis, TN., home. His life goal is “to bring peace to the world, one day, one interaction at a time”.