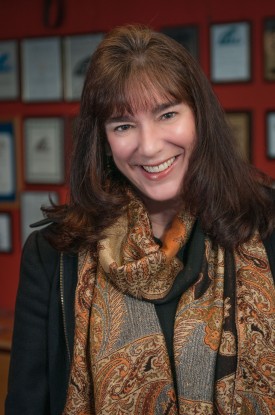 Multi-Emmy nominated Producer/Director Karen Adams has been creating community-focused media for over 20 years. As Midpen Media Center’s Production Manager, Karen oversees 300 studio programs and events annually — training, coaching, and supervising a pool of over 300 producers and crew, and managing a team of part-time studio technicians and workshop instructors.

Aside from four Emmy nominations, including one for the PBS-aired documentary Riding the Storm, Karen’s projects have been recognized with a San Francisco Peninsula Press Club Award, two San Jose Film & Video Commission Joey Awards, and Cinequest and Berkeley Film Festival screenings, among two dozen or so honors. Karen has a passion for documentary film and has served on the United Nations Association Film Festival Advisory Board & Jury.

Of all Karen’s professional accomplishments, she feels especially grateful for the opportunity to amplify the media messages of over 250 community organizations annually; facilitate the delivery of the difficult conversation or seldom heard message; and support the entire spectrum of community on a relatively unbounded stage for creative expression, cross-cultural connection, and broad-minded engagement.