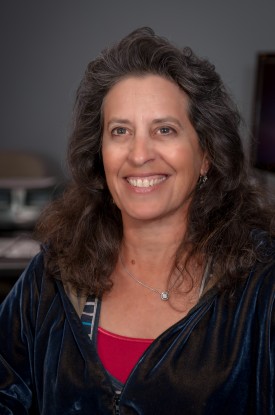 Nancy’s first connection to the Media Center was as a volunteer in the studio. She joined the staff in 1999, producing and directing an award-winning local public affairs program. Nancy has worked in all aspects of video production, including shooting, editing, and special effects animation, for field and studio. She also worked on the Pro Services website and other design projects.

As a Media Center instructor, Nancy taught field production, studio production and editing, and also became a part-time Production Manager in the studio. She was a curriculum developer for studio graphics classes, for the Zoom-In field production workshops, and for Final Cut Pro video editing classes.

Nancy’s background is in graphic design, photography and documentary film. She grew up in the midwest and transplanted herself to the west coast at the tender age of 19. She received a BA in Art and a Masters in Communication from Stanford University. Before the Media Center, she produced, directed and edited several short documentaries, some of which have gone to film festivals around the world.

Nancy’s home is in the Santa Cruz Mountains, where she enjoys spying on the wildlife, organic gardening and rowing crew in the early morning hours.