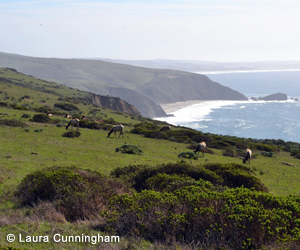 On September 3rd, we aired the first episode of a new series titled Point Reyes: A Wilderness In Peril on Channel 75 and Channel 28. Producers Diane Elise Gentile and Cynthia Abbott described the series as an exploration of “the threats facing Point Reyes National Seashore and the decades-long battle to reclaim and restore the park for the public and future generations.” The series consists of seven total episodes that will air throughout September and October, each lasting forty to fifty-five minutes.

Point Reyes National Seashore, located on the west coast of California, calls itself “a natural sanctuary” and “a human haven” due to its gorgeous geological aspects and hundreds of species of wildlife, many of which are endangered. However, the National Park Service proclaiming its protection of the elements has been putting profit over principle. A third of the land is leased out to wealthy ranchers who disregard the consequences of their cattle farming. The pollution from their farming, including the excess amount of cattle feces, destroys much of the shore’s wildlife in and out of the water resulting from the overabundance and improper disposal of waste. One of the majorly affected species of ranchers’ pollution is the herd of Tule Elk, a keystone species in Point Reyes’ ecosystem. Millions of the tourists traveling thousands of miles to see these elk have no idea about their rapidly approaching endangerment and possible extinction… and the National Park Service has yet to commit to secure action against it.

This hard-hitting documentary-style examination of the Point Reyes National Seashore exposes the many wealthy ranchers using industry-farming techniques that are destroying the land, as well as those who turn a blind eye. You can find out more about the series in its program description — and be sure to watch it as it airs weekly on Channel 75 Mondays at 12:00 pm and Fridays at 9:00 PM, or Channel 28 on Sundays at 2:30 PM and 9:30 PM, and Tuesdays at 11:00 AM.