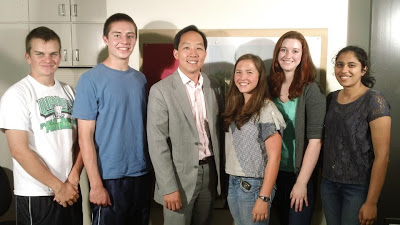 PRESS RELEASE
For Immediate Release
Tuesday, January 15, 2013
Youth Video Corps to Attend Inauguration!
In recognition of their production of two videos about Palo Alto infrastructure on behalf of the City of Palo Alto, the five high school members of the 2012 Palo Alto Mayor’s Youth Video Corps will attend Inauguration in Washington, DC from  January 18-22, 2013.
Accompanying the five students will be former Mayor Yiaway Yeh, Media Center Programming Manager Becky Sanders who managed the 2012 Mayor’s Youth Video Corps and Media Center Intern Wes Rapaport.  The five youth are Gunn High School students Dakota Baker and Nitya Kasturi, Palo Alto High School students Alec Furrier and Kenny Jones and Caroline Clark of Woodside.  Airfare for the five students and the two Media Center staff members is generously provided by Southwest Airlines.
As part of their assignments during the Inauguration, the group is tasked with creating videos for the Democratic Municipal Officials (DMO) organization about Inauguration activities and will have the opportunity to interview elected officials at the National Association of Broadcasters facility in Washington.   The DMO is a national organization open to all elected Democratic municipal officials.  The group will travel to DC with production equipment provided by the Media Center.  Tickets for the Inauguration were arranged for through U.S. Representative Anna Eshoo’s office.
This trip was the brainchild of the DMO and former Mayor Yeh, who served on its board.  He believes it is important to bring youth into the political conversation as early as possible.   He looks to develop the public servants and leaders of tomorrow, today:  “It is important that youth voices be brought into civic life and for them to know that they can and do make a difference.  Just because they don’t vote yet, doesn’t mean they can’t influence policy.  I hope that by bringing them to Washington at this historic time, they might get a little fired up.   The students worked incredibly hard on the infrastructure videos for Palo Alto, and this is one way Congresswoman Eshoo, the National Association of Broadcasters, and the Democratic Municipal Officials organization have chosen to recognize their outstanding work.”
DMO Executive Director Barbara Moore shared her thoughts on Palo Alto’s Youth Video Corps partnering with the organization. “Youth engagement is important to the DMO and each of our member local elected officials.  We are proud to sponsor this group of students from Palo Alto to take part in the historic 57thPresidential Inauguration and recognize their ability to capture important perspectives on film.”
“When we made a decision several years ago to encourage youth to work with the Mayor’s office to create videos around civic topics, we had no idea their work would lead to this fabulous opportunity,” says Media Center Executive Director Annie Folger.   “When Sid Espinosa was mayor, we provided volunteers to cover some of the issues and events in Palo Alto for him.  Wes Rapaport was one of those volunteers.  The two videos that the youth created for Mayor Yeh on Crossbores and the El Camino Park Reservoir took this collaboration to the next level.  We are very grateful to the Mayor for recognizing the youth for their contribution to civic life in Palo Alto and we are very grateful to Southwest Airlines for making this trip possible.”
“The Youth Video Corps is still in its nascency,” says Becky Sanders of the Media Center.  “With Sid, we ran it with a few people.   Last Spring, then Mayor Yeh, the Media Center youth coordinator (at the time) Brad Sanzenbacher and I visited the two Palo Alto high schools and pitched the idea to some of the classes.  Two students stepped up from each high school, and then Dakota brought in her friend from Woodside.  For me, ‘it was the more the merrier!’  So we went to work and I was delighted when the youth received a special proclamation from the city on December 17, but I was stunned when the Mayor announced the trip to the Inauguration. In addition to these five high school students, two Palo Alto middle school students, Ari Ugur and Carson Cordova were recognized at City Hall for their work as Production Assistants on one of the videos.
To view the two videos created by the Mayor’s Youth Video Corps, follow these links:
http://www.cityofpaloalto.org/gov/depts/mgr/news/mayormsg/2012/090112.asp
http://www.cityofpaloalto.org/gov/depts/mgr/news/mayormsg/2012/110112.asp
For more information contact:
Annie Folger
Executive Director, Media Center
650-494-8686 ext 17
annie@midpenmedia.org
Becky Sanders
Programming  Manager, Media Center
650-494-8686 ext. 11
becky@midpenmedia.org
Yiaway Yeh
Former Mayor, City of Palo Alto
yiawayyeh@yahoo.com
(650) 380-8003

The Midpeninsula Community Media Center empowers citizens to use television and the internet to create and distribute media that promotes and builds community through civic engagement and cultural exchange. The Media Center provides classes, a TV studio, and digital production facilities to mid-peninsula residents and workers – with a special emphasis on youth and bridging the digital divide. The Media Center televises and webstreams city council and school board meetings for a number of communities. The Media Center was selected for the 2011-2012 “Overall Excellence” award by the national Alliance for Community Media.