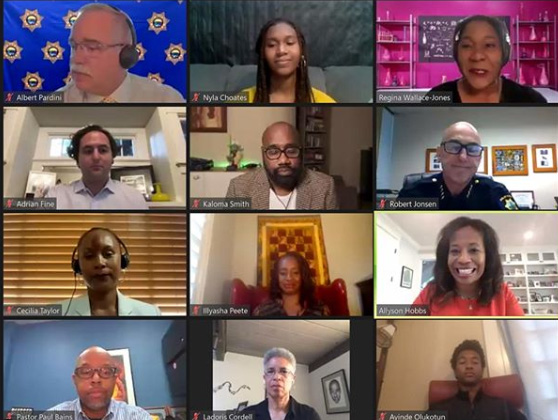 Midpen Media is proud to continue our role as a vital connection point for the communities we serve throughout the COVID-19 pandemic. In July, our staff produced a timely two-part series, “Social and Racial Injustice in America: A Public Roundtable,” to address recent and ongoing racial injustice. The first roundtable was held July 1st and the second roundtable on July 29th.

Director of Programs Jesse Norfleet and Studio Tech Stan Ng, along with the assistance of a staff committee, translated studio production practices to the Zoom video conferencing platform. Stan coordinated the screen views of panelists and incorporated video calls from the audience. Although Jesse missed the face to face interaction of the studio, the online events reached a larger audience from near and far. The first session engaged over 130 live views and the second pulled in about 90.

When selecting the discussion panelists, Midpen Media’s community relationships made finding experienced and knowledgeable individuals easy. The staff committee created a strategic list including youth leaders, police departments, the mayors of Palo Alto, East Palo Alto and Menlo Park, educators, and clergy. The diversity of government officials, local police departments, youth and adult activists ensured that the voices demanding change were heard by those in a position to initiate change. The moderators for both events were Stanford University Associate Professor Allyson Hobbs and Rev. Kaloma Smith, Pastor of University AME Zion Church of Palo Alto.

The roundtable discussions educated viewers on the current state of racial injustice and inequality as experienced on the Peninsula. Panelists shared how they have been impacted by racism, how they have responded to it, and how they are hoping to make a change. A mayor explains the struggle within the government to get the policy meant to improve people’s lives implemented effectively. A youth activist who doesn’t see African American accomplishments being taught in school is now leading a movement at her school to require ethnic studies. Another youth activist co-organized the June 6th Palo Alto Protest where thousands of people came together peacefully to demand social justice after the killing of George Floyd.

The two-hour sessions gave panelists time to introduce themselves, share their often heart-wrenching experiences, and address questions and comments from the community. Some audience members left their questions in the chat forum for moderators to address with the panelists. One such question came in for the Palo Alto Chief of Police asking what the department had done within the last month to make the changes the community wants to see. The Chief said this is the right time to make changes and noted that the department has been very involved in community conversations and is actively looking for ways to improve services and update policies. Other audience members came on screen with the panelists becoming a deeper part of the conversation.

Both sessions are available on Midpen Media’s YouTube channel and will run on cable channel 30 this month.