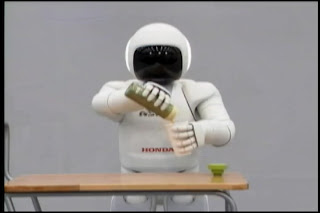 One of the fastest growing fields of technology is the field of robotics. A robot is a machine that can act intelligently, either by preprogramming or through remote control, to accomplish specific tasks. Although some robots, such as Honda’s Asimo, have a humanoid appearance, most do not. Some of the useful abilities robots can have include the ability to move, to grasp, to lift, to “see”, and to receive and send information. Modern robots can perform tasks ranging from vacuuming your floors, to assembling automobiles, to exploring other planets.

In this month’s Future Talk, host Martin Wasserman discusses robotics with Chuck Colby, who has worked for more than 50 years as an inventor, and whose work now deals mostly with robots. Chuck has scored numerous technological firsts in his career, including the first home satellite receiver station, the first low cost telephone answering machine and the first low cost TV camera. He created what’s believed to be the world’s first commercial pocket transistor radio at the age of twelve. Chuck demonstrates several of his robots on the show, including the T-Bot, which allows the user to be in virtually two places at the same time.

We also have videos of two very different kinds of robots. Honda’s humanoid Asimo robot is shown pushing a cart, unscrewing a lid from a bottle, pouring a drink, and handing it to a human. The MULE, a driverless military vehicle developed by the U.S. Army, is shown climbing over walls, carrying large quantities of equipment, following the troops wherever they go and figuring out the best route to get there.

Click here to see the TV schedule for Future Talk. Future Talk is one of several dozen local TV series produced at the Midpeninsula Community Media Center, a nonprofit agency that provides a TV studio and video production equipment to the public.