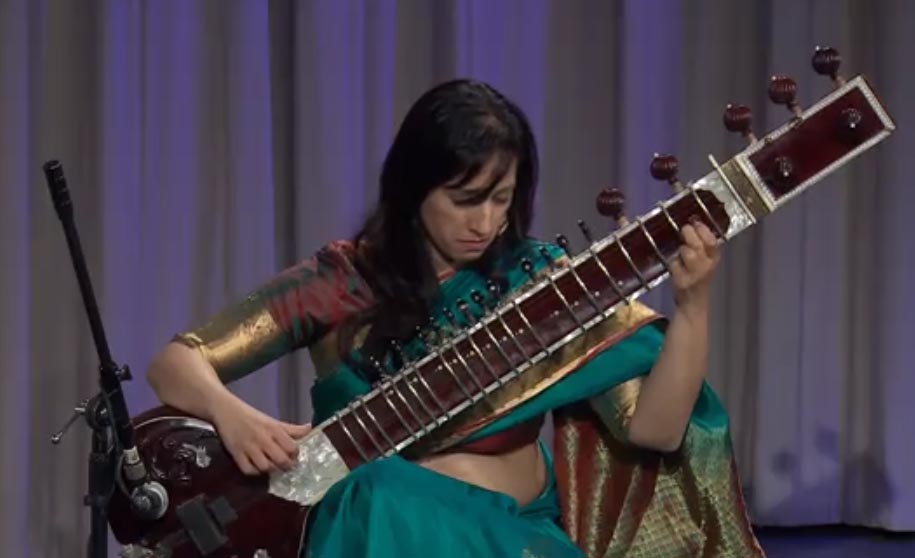 By way of introducing Sahaja Yoga Meditation to the Palo Alto area, the Fremont, CA-based meditation center held a self-realization and classical Indian music event at Midpen Media Center on June 1st. The event was advertised through Eventbrite, local meditation centers, and at mediation sessions held at Google. Between 50 and 60 people, 20 of whom were yogis, filled the studio and adjoining hallway to listen to the live music and to take part in the meditation.

Sahaja Yoga Meditation volunteer Anna Morgan helped organize the event. The program started with 45 minutes of music, transitioned to a half-hour of guided meditation, and closed with another 15 minutes of music. “Listening to music can help people go into meditation right away,” says Morgan.

Both Amit Kavthekar who played tabla, a percussion instrument, and Seema Gulati on sitar, a string instrument, have studied under prominent musicians. The tabla player’s role is to build a framework for the sitar player to move within the structured music. “Each note and instrument in Classical Indian music corresponds to an energy center,” says Morgan.

The audience was invited to relax and enjoy the music first, then participate in meditation to gauge how they felt before and after meditating and reflect on the influence of music. Carolina Calmon and Sunil Puri, who also leads the Google sessions, led the audience in meditation. According to Morgan, the practice of Sahaja Yoga Meditation is a state of thoughtless awareness called turiya. Turiya causes our energy center to connect with operating the power of love, and turns off the flow of internal dialog.

Some participants reported feeling a cool breeze coming out of their hands or from the top of their head. Morgan explains that the central nervous center becomes activated during meditation, causing these sensations. She said one person who was under a lot of stress before the event was able to let go of the stress, and she noticed a decline in thought activity as her brain relaxed. Yogis and novices alike were happy with the experience and left feeling calm and joyful.

The Sahaja Yoga Meditation center offers free events throughout the year for children and adults. Visit their website to find out how you can develop physical and mental balance within your everyday life. Morgan hopes meditation can help participants, “Find out who we are. We are more than what we think we are.”