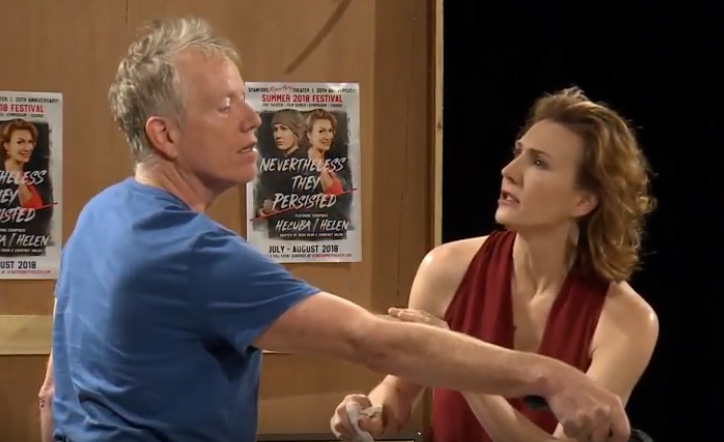 By Eva Barrows
Hecuba and Helen, survivors of the Trojan War, one on the losing side and the other on the winning, both find ways to triumph through tragedy in Euripides’ ancient Greek plays. Stanford Repertory Theater has adapted Euripides’ individual plays “Hecuba” and “Helen” and united them into one: “Hecuba/Helen” contrasting the stories of the two powerful women. Stanford Repertory Theater is celebrating its 20th anniversary with a summer festival, “Nevertheless They Persisted,” featuring live performances of “Hecuba/Helen,” running July 26 through August 19th.

Peninsula Backstage recently welcomed Stanford Repertory Theater to the Midpen Media Center studio. Performers from the “Hecuba/Helen” chorus and principal actors gave samplings from the two stories. Moody and foreboding tragedy are quickly set through an emotional monolog and eerie dance. Then actors switch to two lovers comedic misunderstanding and talk of romance.

Nina G. Perry talks with director Rush Rehm, choreographer Aleta Hayes and lead actor Courtney Walsh on Peninsula Backstage. Rehm translated the ancient Greek plays and Walsh made updates to the language for a modern audience. When studying the text, themes of war, immigration and the “Me Too” movement emerged as issues being dealt with as far back as over twenty thousand years ago. Powerful female characters from ancient times convey meaningful messages relevant to today.