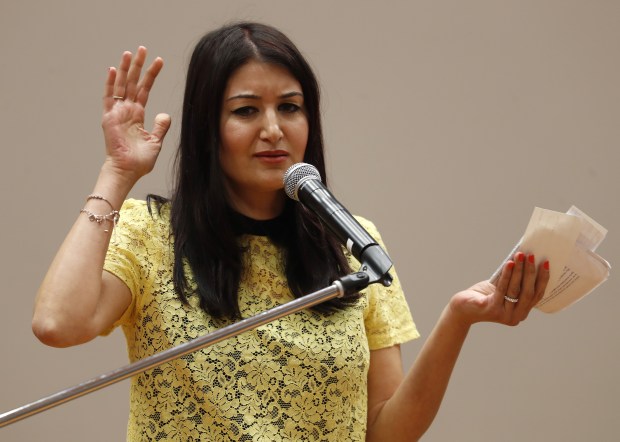 On May 10, the Midpeninsula Media Center and the City of Palo Alto Library co-sponsored an evening of stories called “When Home Won’t Let You Stay: Stories of Escape and Refuge.” Storytellers from five different countries recount events in their homelands that transformed their lives and provoked them to plan dangerous escapes to a crowd of 125 people at the Mitchell Park Community Center. In the case of Rona Popal of Afghanistan, she and her husband were already on assignment in New York when the Russian Army invaded Kabul and installed a new government. They could not return as her family was now vilified. Quy Lee was a teen-ager in South Viet Nam following the North’s victory in 1975. He felt he could “no longer breathe” given all the new restrictions and police surveillance. Quy Lee talks to audience members after he told his story about leaving Vietnam for the program “When Home Won’t Let You Stay: Stories of Escape and Refuge” at the Mitchell Park Community Center in Palo Alto, Calif., on Thursday, May 10, 2018. (Nhat V. Meyer/Bay Area News Group)

He bought a small boat and enlarged it over a year or so, eventually taking 265 passengers with his family in search of a refugee camp in Malaysia. Toukhig Arabian and her family escaped Aleppo, Syria when snipers, car-bombs, and kidnappings had become a daily reality. Margaret Petros and her family faked a vacation to Jordan to escape Iraq when they could no longer practice their religion openly. Ghezae Kidane and his girlfriend escaped from the autocratic rule and the endless national service in Eritrea to reach a refugee camp in Sudan. All of them rebuilt new lives from scratch in the US.

Media Center Project Coordinator, Elliot Margolies Elliot Margolies recruited the five presenters and coached them in storytelling skills over the months preceding the event. “It takes a lot of courage to stand up in front of a big audience and share some of the most challenging, often wrenching, episodes in one’s life,” Margolies said. “Add to that – the challenge of telling a story in a second language from what you grew up with…There’s so much to appreciate about what they shared.”

Besides the stories, the event attendees were able to view art and family objects on display. There were intricate Syrian needlepoint tapestries from Afghanistan, drawings by children hoping for peace and a wall hanging woven with the images of weaponry that have become part of everyday life. From Viet Nam, an agricultural hat and a leaf that Quy brought from his neighborhood pressed between the pages of a book. From Iraq a painting of Assyrian folk dancers. From Eritrea a ceremonial coffee urn, colorful woven baskets used to carry food and supplies, and an old handwritten tiny prayerbook bound by hand as well.

Food representing each country was plentiful, including baklava, bolanis, eggrolls, hummus made by one of the storytellers.

The event was covered the next day by the San Jose Mercury News making the front page with the foremost headline.

Acton Family Giving made the event possible along with a generous donation from Friends of the Library.